Inside the Mind of an Architect: How to Make Glazing Projects Better 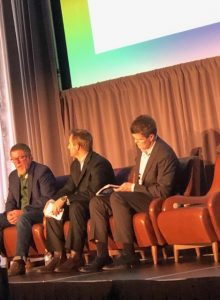 From left to right, George Feathers with Terracon and Jacob Johnson with Harmon, participated in a panel discussion that was moderated by Cameron Scripture with Viracon.

What do architects want? That was one of the questions addressed during the “Mind of an Architect” discussion during the Building Envelope Contractors (BEC) Conference, taking place in Nashville, Tenn. Jacob Johnson, operations manager with Harmon Inc., and George Feathers, senior architect, building envelope services with Terracon, discussed some of the issues that can help strengthen the glazier-architect relationship, and how they can work better together.

During the discussion, Feathers said it’s important for architects and contract glaziers to develop relationships to best work through project issues that can arise such as pricing and establishing budgets. He explained that as companies get more into the project, establishing those relationships allows them to work through various details, which is also extremely important.

Collaborating and working together early on was also a big discussion point. Feathers pointed out that in design build, for example, one nice thing is being able to get certain key contractors in early “and that’s the preferred time to start that process because you’re making important design decisions early … You develop that information faster, earlier and sooner [so it isn’t] done later in the process.”

The panelists also talked about delegated design. Feathers said there seems to be a lot of misunderstanding about what delegated design actually involves. He explained this is a process where companies are working as a partner with a specific contractor, and not moving the design off of the architect and onto the contractor. They’re coming together and working as a team to make the project better.

One thing architects are challenged a lot with these days is schedules. This can also be a challenge for some contractors, who don’t understand them as well as others. Technologies such as BIM and Revit can help in making decisions faster, but they are still not perfect. Panelists agreed that working as a team helps build a contractor-architect relationship that can also be beneficial to the process later on.

The session also covered the glazier-architect relationship, and measures that can be taken to strengthen it. Feathers suggested glaziers get in front of the architect early on.

“Don’t wait for the project. Call up the architect, get in front of them and work with them. Spend the time to build a rapport with the architect,” he said. “Once you have a relationship, it’s easier to get in on the project later on.”

Questions also covered the most effective means of communicating, such as a phone call or email. Feathers said everyone will have different preferences.

Someone from the audience questioned what other alternatives to education there are other than lunch and learns. In addition to product demonstrations, Feathers also suggested glaziers could invite architects to visit their facilities to see how things come together or to a jobsite to see a project.

“I think what’s helpful is seeing something built with your own two eyes,” said Feathers. “Not everyone can think in 3D. There is a lot of complexity with the glazing systems so it’s good to see things, feel, touch and understand—the more they understand the better they can responsibly design.”

Another audience member asked about an appropriate measure of contact with the architect “without being annoying” if they are not actively engaged with a project. Feathers said maybe every month or two, “but for some architects that might be too much.” He said it will depend on the relationship and contacts that are already established.

“Stay in front of architect. Get to know them. The conversation doesn’t always have to be about glass … it’s ok to be personal,” he added.

The key takeaway from the session was the importance of communication.

“That’s the biggest thing,” said Feathers. “Don’t be afraid to write an email, make a phone call, go to an event … Go out there and meet the people. Finding the right way to communicate is most critical.”

Johnson added that in terms of working with architects, companies can’t be all things to all, but they still have to respond in a timely manner.

Feathers agreed and added, “The worse way to do things is to say you’re going to do something and then not doing it. Those things [i.e., following up] keep that good relationship going.”

The BEC Conference ends today in Nashville. Stay tuned to usglassmag.com for more news and updates.

1 Response to Inside the Mind of an Architect: How to Make Glazing Projects Better