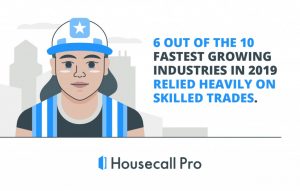 Labor shortages have been an ongoing topic of concern for the industry, as many companies have found interest in entering trades has declined. But that might be changing, according to a recent report from Housecall Pro, which highlights return on investment (ROI) for traditional colleges and universities compared to entering trades.

According to the report, within the past three decades the price of a college education has increased at a rate that is significantly faster than that at which wages are increasing. This type of increase contributes to higher amounts of student loan debt, of which today’s students are mindful. Aside from having a lower amount of debt, those who enter the trades have the potential for having higher ROIs as they relate to earnings, the report says.

“Trade schools are typically two years, which means you can start earning money sooner. Trade school pays itself back many more times than college over a lifetime,” the report reads. 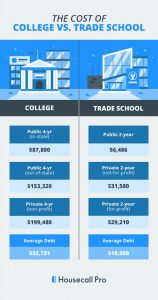 Finding high demands for a specific job upon graduation is another benefit for those who invest in learning trades, according to the report, noting that less than 30% of traditional college graduates work in a field directly in line with their course study, posing several questions about the pros and cons of either option for higher education.

According to an analysis by Abrigo, six of the top ten fastest-growing U.S. industries in 2019 were part of the construction industry – which employs skilled trade workers extensively.

This is also probably why the Bureau of Labor Statistics found that the most lucrative trade job in the U.S. was a construction manager – with a top earning potential of over $77 per hour, according to the report.

“Is a flexible career path and higher earning potential worth the additional cost, debt, and time in school for a college degree? Would you prefer to get started in life sooner with the potential to begin saving earlier,” a portion of the report reads. “There is no wrong answer, especially given that some of the most lucrative trades can often reverse the narrative of ‘college grads earn more.’”

Could the need for skilled tradespeople be lessened in the near future due to more high school graduates deciding to enter the trades? Leave your thoughts in the comment section below.

1 Response to Report Explores Value of Entering a Trade