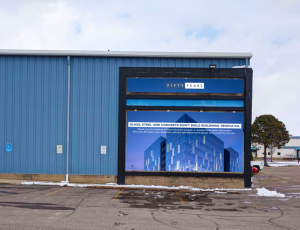 Viracon is displaying a 130- by 230-inch glass lite with a 50th Anniversary illustration thanking its employees and customers at the arrival area of its Owatonna facility.

In 1969, a windshield salesperson named James Martineau approached Apogee’s board of directors with a proposal to create a regional glass fabricator. The board approved the proposal and, in April 1970, Viracon became one of the nation’s first regional glass fabricators. The company, led by Martineau, began with a 45,000-square-foot glass fabrication plant and 20 employees. It serviced a radius of a few hundred miles. Now, 50 years later, Viracon is no longer a regional supplier, but an international powerhouse whose glass products have been installed all over the world.

Garret Henson, vice president of sales and marketing, says the name Viracon was created by combining the words “environmental control,” as the company leadership dreamed of creating products to control the environment.

One of the major highlights of Viracon’s history came in 1986 when its first coater began operation. Prior to that, the company mainly focused on laminated (including auto glass), tempered and insulating glass.

“This became the foundation of our company. To this day we are known for our proprietary coatings,” says Henson, who joined Viracon in 1993.

He says that in the early ‘90s, PPG announced it was exiting the architectural glass fabrication business.

“When that happened, Viracon’s work spun dangerously out of control. We were coming out of a recession and our business quadrupled over a three- to four-week window,” explains Henson.

This was around the time that Viracon exited the automotive glass business to focus on architectural glass fabrication. It’s architectural sales team began educating architects directly about Viracon’s products, which Henson says was a disruptive method at the time.

Also in the late 1980s and early 1990s, Viracon’s team began to sell glass overseas, which resulted in Viracon being specified for major projects in China, Hong Kong, Singapore, Australia and India.

“Many people in our Minnesota-based company had never taken a trip anywhere … This was when globalization was just beginning; we were on the forefront,” says Henson.

In 2010, Viracon acquired Glassec Vidros de Seguranca Ltda, a glass fabricator in Brazil that is now named Glassec Viracon. Henson says it was Viracon’s first time acquiring a company outside of North America.

“It was a great investment for us. About 75% of the glass stays in Brazil and some is exported,” he explains.

In its 50 years, Viracon glass has been installed on over 100,000 buildings, with half a billion square feet of glass delivered across the globe.

Going forward, Henson says the company is working to remain meaningful and relevant through new innovations, products and services.

“We don’t want to get comfortable with our success. We need to plan for what we’re going to be doing during year 51. We’re already working on products and product partnerships that will be launched in upcoming years,” he says. “We’re trying to find ways to become faster and more efficient and to lower our costs to be more competitive in the marketplace. We’re also finding more ways to automate.”

However, Henson says the company also must deal with today’s challenges. One challenge he sees for all glass fabricators is the growing complexity of projects.

“It’s very hard to price and then get paid for the complexity and risk associated with fabricating architectural glass. We have nothing placed in inventory. Everything is custom-made for a job,” says Henson. “… As we keep moving forward we hear things from the architectural community about new software developments. This makes our environment that much tougher.”

Another challenge is the strength of the U.S. dollar, which Henson calls both a blessing and a curse.

“It’s enabled offshore products to come into North America. The competition is something we have to deal with,” he says.

To celebrate its 50th anniversary, Viracon held an event in Nashville, Tenn., last month where it invited its customers to enjoy an evening at a country bar. Henson says that once it’s possible, Viracon will hold parties and cookouts for its employees at both its Owatonna, Minn., and Statesboro, Ga., facilities.

The company also will create special product kits, give gifts to contract glazing customers and architects, and display a 130- by 230-inch glass lite with a 50th Anniversary illustration thanking its employees and customers at the arrival area of its Owatonna facility.

4 Responses to Focus on Innovation Leads Viracon to 50th Anniversary