Required Courses: School Safety and Security is Not an Elective 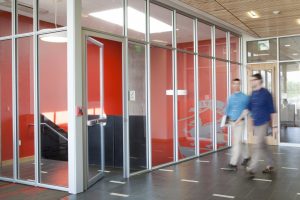 When it comes to school safety and security, you can’t cut corners. Unfortunately, though, not every school district has the funds to install security level glazing products. Educational facilities may consider some type of protective glazing, but decide against it. Sometimes it’s because they decide on another design option, but not always.

“It’s the cost,” says Kevin Norcross, general manager of Vetrotech Saint-Gobain. “Standards and codes need to be in place [to push the use of these products].”

And that’s the challenge—there aren’t any codes or standards driving the use of these products in designing safe schools. Even beyond that, moving these products into the mainstream will call for change—in design, budget and mindset.

While impact-rated products may not be a requirement in K-12 facilities, there’s one form of protective glazing that is: fire-rated. These products are code driven for life safety, making them a security product by nature.

“At their core, fire-rated products are designed to compartmentalize elements of a fire to reduce its impact on the building and its occupants during an event,” says Tim Nass, vice president of sales for SAFTI FIRST Fire Rated Glazing Solutions. “Typically, we find fire-rated products in prominent roles within a school’s design—exit enclosures, stairwell enclosures, classroom entrances and main corridors. Security features such as forced-entry or bullet-resistance in the education market segment have become an unfortunate by-product of societal developments. Those added performance features are a natural fit to dovetail into fire-rated systems. Over the last five years the demand for security features has increased in order to make schools more secure on multiple levels.”

“Fire-rated glazing, along with some form of intruder resistance, is being specified more and more,” says Norcross. “Because there is no uniform specification, everyone who makes these products has their own spec that goes along with it. You’re seeing architects, owners, etc. wanting to protect the students and teachers, but they’re relying on manufacturers to provide the information on how to do it.”

“There isn’t a standard or code language to dictate where in the building these products should be used. [There’s nothing that defines] the minimum requirement and according to what standard. It comes down to school districts, school boards, etc. that are making decisions based on a sense of urgency and budget dollars. We’re seeing a category of product requirements that’s still at the infancy stage and still needs to be regulated.”

While fire-rated protection is mandated by code, enhancing and strengthening a school’s safety and security are not; at least not yet. Having such measures to aid in designing and specifying for school security will be essential to moving the use of these products forward. Currently, a working group within ASTM International Committees F12.10 and E54.05 is developing a new Standard on Mitigation of Armed Aggressors in Educational Institutions, which, according to the scope, is intended to “describe risk and threat analysis, design, specification, selection and application of building plans and systems to minimize the impact of armed aggressors in educational institutions.”

Earlier this year, industry codes consultant Thom Zaremba discussed the process of developing school safety and security codes and standards during the National Glass Association Annual Conference. Zaremba said while the building code bodies are working on these issues, they’re confronting some problems, specifically, addressing whether it’s possible to prescribe how buildings should be built in order to confront an active shooter.

“Every time you try to enhance security it’s more difficult for first responders to get in or occupants to get out,” said Zaremba, who added that the only real standard that currently exists is NFPA 3000, Standard for an Active Shooter/Hostile Event Response Program, which isn’t related to building design, but rather how the building communicates with first responders and others who respond to these situations.