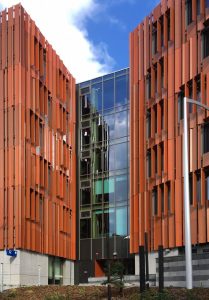 Gillies Hall student residence at Monash University in Melbourne, Australia, was completed in February 2019 and is currently Australia’s largest certified Passivhaus building to be constructed with components made from cross-laminated timber (CLT). The glass elements of the building envelope, supplied by Saint-Gobain Glassolutions, were realized with the warm edge spacer bar Swisspacer Ultimate.

Jackson Clements Burrows Architects (JCBA) designed Gillies Hall. The student residence, which is located on the Peninsula Campus of Monash University in the Melbourne suburb of Frankston, has six stories and a gross floor area of nearly 70,000 square feet, making it currently the biggest Passivhaus-certified building constructed from CLT panels in the country, and even in the southern hemisphere.

With Gillies Hall, the architects met the university’s stated goal of being emissions-neutral (net zero carbon emissions) by 2030. The building is certified as having a heating requirement of 5 kWh/m²a; it thus achieves a value that is around 70-80% lower than a comparable building constructed in the usual way for Australia. According to information provided by the engineers of Grün Consulting commissioned with the Passivhaus certification, the primary energy requirement of Gillies Hall is 131 kWh/m²a. The air replacement rate n50 is 0.5. 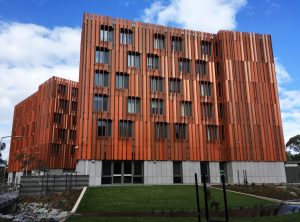 The student residence has 150 single apartments, two serviced apartments as well as common areas available to the approximately 250 students who live on campus. The warm, pale tones of the glulam walls and ceilings characterize the atmosphere inside the building and make Gillies Hall a comfortable temporary home. The solid timber construction, which stands on a concrete plinth, was erected in only 11 weeks. Outside, the five upper floors carry cladding made of red-orange, vertical sheet metal slats. The slats are mounted in front of the windows at an angle of 90 degrees, which casts vivid shadows onto the building envelope. 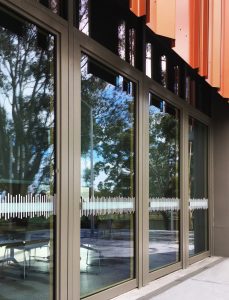 The correct choice of glazing is extremely important for achieving the Passivhaus standard. Over 10,000 square feet of insulated glass from Saint-Gobain Glassolutions were installed in the student residence. In order to efficiently eliminate cold bridges around the edge of the glass, the Passivhaus-certified warm edge spacer bar Swisspacer Ultimate was used. With a vapor and gas-tight foil, the high-performance spacer bar also ensures that the gas filling cannot escape from the cavity between the panes and that no water vapor can penetrate it either—and all for the entire lifespan of the window. This permanently guarantees the insulating function of the insulating glass and consequently of the building, too.

The Passivhaus standard is also supported by the solar panels installed on the roof and the wind energy supplied from the Murra Warra wind farms between Adelaide and Melbourne. In addition, Gillies Hall has a rainwater tank; an appropriate concept allows the use of excess quantities of water on campus.

At the inauguration ceremony in August, Professor Margaret Gardner, president and vice chancellor of Monash University, praised the building designed by JCBA as “the best addition to the Peninsula Campus.” Gillies Hall is the first building to have been completed by the university in accordance with the prerequisites of the Net Zero Initiative.

The architects have already received numerous awards for their new building, including the 2019 Climate Prize of the Construction21 “Green Solutions Awards”, first place in the Premier’s Sustainability Awards and the Sustainability Prize of the Australian Timber Design Awards, also awarded in 2019. 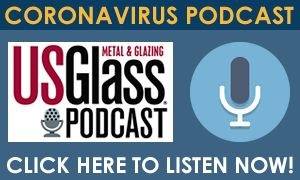