Patrick Kenny Reflects on 40-Year Career as He Approaches Retirement 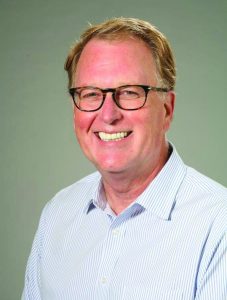 Patrick Kenny, vice president of marketing for Vitro Architectural Glass, has been a pioneer throughout his 40-year career in the glass industry. He’s led new departments and taken on roles that didn’t exist previously. After spending his entire career with PPG and, later, Vitro Architectural Glass after PPG sold its flat glass division, Kenny plans to retire on May 31, 2020 and begin a new adventure.

Kenny first joined PPG in 1980 in its sales and marketing training program. He says he was exposed to all parts of the glass business, from fabrication to installation. In his early years he worked in an estimating and project management role, relocating several times. He took his first sales management job in 1986 before moving to Hong Kong in 1989 where he was in charge of all Asian sales.

“My first 11-12 years were in sales management positions. I moved back to Philadelphia in 1991 and was asked to work on a special project. At the end of that project the company decided that the flat glass business should have its own marketing department,” says Kenny, adding that he started the team since he has a degree in marketing from Indiana University Bloomington.

Kenny spent eight years in corporate marketing roles before returning to the flat glass division in 2012. Since then he’s been director or vice president of marketing.

“I experienced different assignments and challenges throughout my career, primarily in the glass business. At the end of the day I’m quite happy to end up in a position where I could marry my passions,” says Kenny, referring to construction and marketing. “I got to go into a career helping architects design the coolest buildings in the world. I’ve lead marketing at the highest levels. When I think back there’s never a dull moment. I never felt bored, stale or not challenged.”

During Kenny’s 40 years with PPG the company was constantly adapting and responding to customer needs. Five of the 13 jobs he held were new positions.

“I had the chance to go into positions with no blueprint or guidance about how people handled it before,” he says.

Another major challenge Kenny overcame in his career was moving to Hong Kong. He says it was an extremely difficult assignment involving seven-day work weeks and travel. Despite the difficulty, he says it was exhilarating.

One of Kenny’s major successes was starting a marketing department from scratch and watching it grow into a full blown development and business management team. He says that in 2003 when PPG started its construction marketing team he worked with directors, vice presidents and field teams of three different business units to put together a cohesive strategy to make PPG more successful.

While working in sales and marketing Kenny has witnessed the evolution of the glass industry. One aspect of the industry’s development that’s impressed him has been the increase in supply chain effectiveness. He says that in 1980 it could take up to 40 weeks for reflective glass to be delivered, putting more pressure on the project team to get dimensions correct. Now, high-performance low-E glass can be delivered in four to six weeks. Kenny has also been impressed by the development of coatings and substrates that glass manufacturers offer.

“It gives architects an incredible palette of tools to design with,” he says.

Kenny’s advice to young people just entering the industry is that as many people retire across the industry there will be opportunities for younger people to come in and grow into important roles quickly.

“A lot of people are aging out of the construction industry and the same thing is happening in the glass industry. This creates opportunities because these positions don’t go away. They have to be replayed. There’s plenty of runway for successful careers,” he says, adding that he expects the industry to stay strong as glass remains a popular design options for architects. “… Find companies that have a real mission and purpose and learn everything you can. Build networks. I met great people in the industry, so meet as many people as you can and give 100%.”

Beginning June 1, Kenny will start a consulting company with five other colleagues who have a combined 250 years of business-to-business expertise to help companies. The company is called Value Ingineering, because it helps put value in companies, says Kenny.

“I’m excited. There are several companies in the glass business that I’d love to work with. We plan to work with other industrial companies as well,” he adds. “It’s a new venture for me and I think it will keep me out of trouble.”