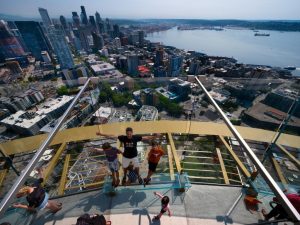 For the Space Needle renovation in Seattle, Kuraray provided its SentryGlas Ionoplast structural interlayer to give visitors a safe, uninterrupted view of the city. Photo: Kuraray

Laminated glass gives architects and designers the ability to improve safety and sound attenuation. It can also provide strength and the means for artistic expression. With a number of possible functions of laminated glass beyond just transparency and daylighting comes many misconceptions. Lamination experts are shedding light on the truth behind these misconceptions.

Misconception: Fully Tempered Glass is the Only Safety Glass

Julia Schimmelpenningh, industry technical manager for architectural products at Eastman Chemical Co., says one misconception is that tempered glass is the only safety glass.

“Many times, in marketing and informational brochures from some associations and organizations you will see reference to safety glass (fully tempered) or tempered safety glass as the only material that complies with codes,” she explains.

In the correct configuration laminated glass also is safety glass and does not need to incorporate tempered glass to be deemed as such, according to Schimmelpenningh. The material simply needs to meet the requirements of CPSC 16 CFR 1201 or ANSI Z97.1.

“The building codes reference the performance and not the type of safety glazing except when glass fall-out is a concern. In these cases, they specifically reference laminated safety glazing (skylights, overhead, balcony, etc.),” she says.

Ron Hull, Americas marketing manager for Kuraray America’s PVB division, says he’s had to correct people on the differences between hurricane-rated and bullet-

“This discussion is usually around school security and schools starting to harden buildings,” says Hull.

Schools from Texas to Maine have hurricane-rated glass and as people worry about keeping schools safe from attacks, some think that glass can do the job.

“To be bullet-resistant the glass has to be much thicker, like closer to 1-inch thick, to stop the smallest of bullets,” explains Hull. “People working on schools sometimes even want the whole building to have bullet-resistant glass, which is too expensive.”

Robert Carlson, who works in mechanical engineering at fabricator Tristar Glass in Tulsa, Okla., adds that glass doesn’t need to be bullet-resistant to provide some forced-entry resistance, which can prevent a potential attacker from entering a building until first responders arrive.

Another misconception is that the specification can just include the hurricane glass, rather than an entire system.

“People ask if they can put in hurricane-rated glass, but the whole system has to pass the hurricane rating together, not just the glass,” explains Hull.

Misconception: An IGU’s Outboard Lite Should Be Laminated

Carlson says he sees laminated glass specified as the outboard lite in hybrid insulating glass units (IGU), but there are few situations where that’s needed. Using an IGU with laminated glass provides protection and insulation for energy efficiency.

“In a chemical factory where you’re worried about an explosion from the inside hurting people on the street it makes sense, but the laminated lite should be placed toward the area you’re trying to keep safe,” he explains. “If there’s wind or an explosion on the outside of the building then it will keep the people on the inside of the building safer if the laminated glass is the

Carlson also says that putting the laminated glass as the outboard lite increases the cost of a unit and the challenge of fabricating the unit.

Carlson adds that, depending upon the quality of the fabrication, delamination may only happen on a 1/16- to ¼-inch of the glass around the edge.

“The safety that product provides and the long-term look and durability benefits greatly outweigh any delamination that could occur over time … If a handrail broke a kid won’t fall and that’s more important than the fact that it’s slightly delaminated,” he says.

2 Responses to Setting the Record Straight: Experts Clear Up Misconceptions about Laminated Glass