Go with the Flow: The Benefits and Opportunities of the Rainscreen Principle 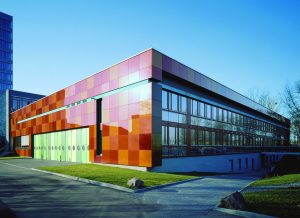 The StoVentec Glass rainscreen system can be used to create unique colorful façades, such as the yellow and orange color scheme used in the Druckhaus Dresden printing house in Dresden, Germany (above and top right), as well as shades of blue used in an aquarium complex, in Palma de Mallorca, Spain. Photo: Sto SE & Co. KGaA

Architects want beautiful buildings that are high-performance, use lots of glass, and don’t leak water. That’s how it starts. Now add in bigger spans of glass, minimal sightlines, make sure the glass is as clear as possible and add a rainscreen to help control moisture penetration.

Unfortunately, addressing a request to add a rainscreen isn’t so simple. Not only do buildings today need to look good, they’re also challenged to save on energy costs while ensuring the occupants have a healthy, comfortable work environment. Yet even before that, a building must meet certain performance requirements: air, water and structural. Of those three, water is the one that probably causes the most headaches. Even after testing, buildings still can leak. Caulking and sealing exterior cracks is certainly a solution, though the results aren’t always attractive. As an alternative, the rainscreen principle is becoming more common, but it’s a term that’s not always understood. However, as glazing contractors find they’re taking on more and more of the exterior scope, understanding rainscreens, how they’re fabricated and installed will be essential for future growth and success.

What is a Rainscreen?

A variety of materials, including both glass and metal, can be used to fabricate a rainscreen. But what, exactly, is a rainscreen? If you’ve ever pondered this question, you’re not alone. Probably the most important detail to understand is that a rainscreen isn’t so much a product, as a design principle. These systems consist of an outer wall (usually the aesthetic layer); an air space; and the inner wall, which is typically the structural/supporting wall. This layer also incorporates the air and vapor barrier.

Defined by the American Architectural Manufacturers Association (now the Fenestration and Glazing Industry Alliance) Procedural Guide for Certification of Window and Door Assemblies, a rainscreen is “an exterior wall construction technique consisting of an exterior cladding (outer leaf), a cavity, and an inner leaf. Rainscreens are subdivided into two distinct performance categories, one being pressure equalized and the second being drained and back ventilated.”

Paul Millslagle, vice president of sales and marketing with Americlad Quality Metalcrafts, explains that pressure equalized systems are designed to ventilate, control and drain any moisture that could potentially penetrate the system, but also add compartmentalization to the cavity behind the system to allow rapid pressure equalization. This design can substantially minimize and, in some cases, eliminate moisture from penetrating the system’s wall cavity. Drained and back ventilated systems are designed to allow moisture behind the system, which is controlled and evacuated through guttering, channeling, etc. The system is also designed to allow air into the wall cavity to dry any moisture that may become trapped.

Sto Corp. is a German building products manufacturer with U.S. operations based in Atlanta.

According to Brock Osborn, strategic business development and rainscreen expert with Sto, Europeans are ahead of North America by 15 to 20 years when it comes to the use of rainscreen design.

“The increased use in the U.S. brought about the need to increase the insulating value of opaque walls and still maintain aesthetics,” he says, adding that the outer wall is typically there to provide aesthetics and sheds 95 to 100% of water. “Rainscreens always have a back-up, airtight wall and the insulation is in the middle. There are various types of subconstruction that go from the back wall to the front wall and hold up the aesthetic.”

The information in this article was originally part of the feature titled, “Go with the Flow.” To read the full article, which originally appeared in the July 2020 issue of USGlass magazine, click here.