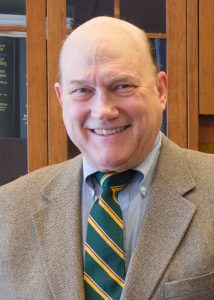 His relationship with the SGCC began in 1987, “where he not only advised with his astute legal mind, but he also mentored, and delighted all those he met with his humor, wit and good nature,” said John Kent of AMS, administrators of SGCC and AGMCC.

“Bill was unique in many ways. Not only did he enjoy every aspect of his life, both professionally and personally, but he excelled in each,” said Peter A. Weismantle, director of Supertall Building Technology at AS+GG Architecture. “Both SGCC and FTI would not be the organizations they are today without his steady and thoughtful input. He was more than each organization’s lawyer; he was a member of our professional family.”

Hannay was approaching his 41st anniversary with Schiff Hardin LLP in Chicago, where he specialized in antitrust law. He was an adjunct professor at Chicago-Kent College of Law and Loyola University Chicago School of Law. He has served as chair of the American Bar Association’s (ABA) Section of International Law and served on the board of the ABA’s Rule of Law Initiative.

Hannay, who earned his undergraduate degree at Yale University in 1966 and his Juris Doctorate degree from Georgetown University Law Center in 1973, also served with commendation in the United States Army during the Vietnam War.

His zest for life was apparent in his passion for theater and music. Hannay was a regular writer, producer and actor in local theater groups, even taking the lead each year to write and direct his firm’s annual holiday show, a tradition for which he is fondly remembered. He was a member of the Great Lakes Dredge and Philharmonic Society as well as his hometown’s Barrington Village Singers.

“He was such a character,” said Julia Schimmelpenningh, global applications manager at Eastman Chemical Co. “I hope his family finds comfort in knowing how many lives he touched in such a positive manner.”

“Bill was such an important contributor to SGCC,” said Bernie Herron of Cardinal Glass Industries.

Helen Sanders with Technoform added, “He was a lovely man and we will miss him.”

Hannay is survived by his wife, Donna, and his children, Capron, Blaike and William. In lieu of flowers, his family asks for donations to be made to the Make-a-Wish Foundation, which granted wishes for his daughter and grandson, and the Fisher House Foundation, which builds homes to house military and veteran families while their loved ones are in the hospital.