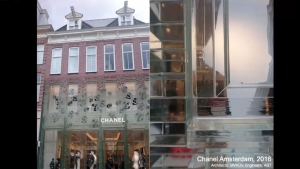 Glass blocks have also been used for high profile projects such as and the Chanel store in Amsterdam.

In the European Façade Network: Safety and Structure group, professor Jens Schneider with the Technical University Darmstadt, presented his paper, “Innovations With Glass.” Schneider explored various projects in which glass has pushed the limits of design in the past 15 years, such as the glass boxes at Willis Tower in Chicago, and areas in which he expects further growth in the future.

He highlighted how glass is getting larger, with some companies able to produce glass up to 65.6 by 11.5 feet in size. He expects to see such large glass sizes slowly make their way into projects. He also anticipates advances in thin glass and cold bending, which he says produces a better visual appearance than warm bent glass which can have a wavy appearance. In addition, he said glass blocks have also been used for some high profile projects such as Atocha Station in Madrid and the Chanel store in Amsterdam.

“It’s also about adding more functions to glass such as shaping and playing with light,” he said, using the Haus der Zukunft in Berlin as an example of a building that uses screen printing to play with light.

In the Façade and Materials group, several papers focused on silicone. The session, “Influence of Performance and Design of Structural Silicone Joints on the Resilience of Curtain Wall Units Exposed to Seismic Impacts,” was co-written by Sika Services AG market field engineer Viviana Nardini and Sika Corp. business development manager Florian Doebbel. In the presentation, Doebbel pointed out that while current standards recognize the benefits of structural silicone glazing (SSG) systems to enhance the performance of unitized curtainwall during seismic events, there is no criteria available for the seismic design of the structural silicone joints. 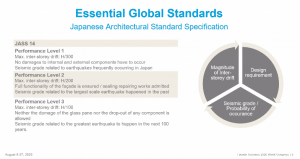 Doebbel looked to JASS14, a Japanese standard, in his proposed design concept criteria for the seismic design of the structural silicone joints.

Doebbel looked to JASS14, a Japanese standard, in his proposed design concept to address this issue. JASS14 has three different performance levels:

“Three main design tools can be used to improve the resistance of a façade unit: hinge brackets, stack joints and SSG joints,” said Doebbel. “Hinge brackets accommodate out-of-plane movements. If designed right, there is no impact on the SSG joint.” 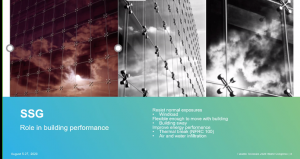 In his session, Jon Kimberlain highlighted the durability of silicone sealants.

Kimberlain explained that there are several types of sealants: polysulfide (organic), polyurethane (organic) and silicone (inorganic). These sealants are used to prevent air and water ingress. They move with the building, sustain loads and can act as a thermal break.

“All chemistries have their benefits, but silicones are known for their durability and weatherability,” he said.

In describing the durability of silicone, Kimberlain pointed to a case study. The first known use of a room temperature vulcanizing (RTV) silicone sealant was used in a weathersealing application in 1958. The sealant was removed in 2013, not because it failed but because the owner wanted to update the look of the façade.

“We did swell gel testing, which involves washing the sealant with a solvent to remove the soluble fraction not tied into the polymer network,” said Kimberlain, who added that testing showed the silicone had not experienced severe degradation.

Kimberlain took some of the sample and placed it on an exposure table. He said it’s now had more than 60 years of exposure and it remains durable.

Kimberlain also explained that hybrids marry different chemistries and can have their own unique behaviors, such as paintability or improved adhesion to cement-based substrates. He said the key is to understand how to develop hybrid technologies that are tunable and more adaptive to sustainable building practices.

“Current hybrids illustrate a pathway,” he said. “The challenge is to incorporate more silicone functionality to support durability.”

The 2020 World Congress runs through Thursday, August 27 with sessions on Wednesdays and Thursdays. Stay tuned to USGNN™ for our continuing event coverage throughout the month.