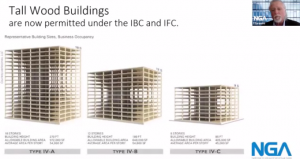 Thom Zaremba explained that the 2021 IBC and International Fire Code will contain a new provision that adds entirely new construction types which allows construction of mass timber buildings up to 18 stories tall.

In addition to topics focused on how the glass industry has adapted to the COVID-19 pandemic, the National Glass Association’s (NGA) Summer Conference featured a codes update with insights into what’s new and upcoming in bird-friendly legislation, energy codes and more.

Nick Resetar, an NGA technical codes consultant with Roetzel & Andress, discussed the Bird-Safe Buildings Act of 2019, which recently was passed by the U.S. House of Representatives as part of a larger transportation act. It is currently with the Senate and is expected to be enacted at some point.

“We fully anticipate similar or identical provisions to be introduced soon. People concerned with the bird population are taking notice and pushing for these requirements on a greater level,” he said.

Codes consultant Thom Zaremba, also with Roetzel & Andress, said that the 2021 I-codes update is expected to be published in October of this year. However, six appeals are currently pending.

International Building Code (IBC) Section 2406 will include an editorial rewrite to use terms defined by the code such as guards and handrails. Previously the section used terms such as guardrails and railing in-fill panels.

“There are several things of note. Although the 2020 CNBC has not yet been published, it’s expected that compliance with the new safety glazing standard will be mandatory for all glazing used in hazardous locations in all assembly occupancies,” he explained. “Assembly occupancies under the CNBC are significantly broader than in the U.S. and includes any part of a building ‘used for civic, political, travel, religious, educational, recreational or like purposes or for the consumption of food or drink.’”

According to Zaremba, this means wired glass must be organically coated to comply with the new standard when it is used in hazardous locations even if a fire protection rated product is also required.

Finally, Zaremba explained that the 2021 IBC and International Fire Code will contain a new provision that adds entirely new construction types which allows construction of mass timber buildings up to 18 stories tall. These building types can be 18, 12 or 9 stories tall depending on the fire constructed material used. The primary building material used is cross-laminated timber (CLT), which Zaremba said is fire-rated up to three hours.

“With the advent of new wood buildings I expect the use of glass to increase. Glass provides views from the inside to the outside, but designers and owners of tall wood will also provide glass to enable people from the outside to look in. The reason is that large CLT beams are remarkably beautiful,” he said. 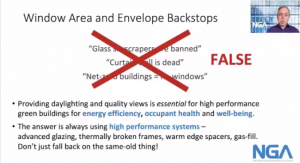 Tom Culp addressed the concern that glass skyscrapers are being banned in New York City, that curtainwall is dead and that net-zero buildings mean no windows by saying all of those notions are false.

Tom Culp, an NGA technical codes consultant with Birch Point Consulting, gave an energy codes update. He said that ASHRAE 90.1-2019 was published last October and the 2021 International Energy Conservation Code (IECC) will be published this fall. Commercial fenestration criteria were aligned in both codes, which Culp said is good for compliance and enforcement. In addition, there’s been a 5-17% reduction in U-factor but only modest reductions in solar heat gain coefficient (SHGC). There are new, separate SHGCs for fixed and operable products, but this will not require different glazing.

The 2022 edition of ASHRAE 90.1 is already in the works. It will include new prescriptive requirements for on-site renewable energy on all new buildings or building sites and new envelope backstop requirements.

“New thermal bridging requirements went out for a second public review. It would reduce bypassing of insulation in zones 4-8,” said Culp.

ASHARE 189.1-2020 and the 2021 International Green Construction Code (IgCC) will be completed this fall. ASHRAE 189.1-2017 and the 2018 IgCC expanded daylighting in more space types. For the next editions, new above-core requirements for minimum views of offices, classrooms and patient rooms were introduced for occupant health and well-being, not just daylight energy savings.

Culp addressed the concern that glass skyscrapers are being banned in New York City, that curtainwall is dead and that net-zero buildings mean no windows by saying all of those notions are false.

“Providing daylighting and quality views is essential for high performance green buildings for energy efficiency, occupant health and wellbeing,” he said. “This does mean that perhaps doing things the old way with old, lower performing systems will be going away. The answer is always using high performance systems.”

Culp also addressed envelope trade-off limits or backstops, which have been implemented in New York City, Washington and Massachusetts. These backstops require envelopes to meet baseline performance levels even when using a whole building performance path. Culp said ASHRAE 90.1-2022 will include a reasonably flexible backstop similar to New York City.

Finally, there are new opportunities on the existing building side with Local Law 97 in New York City and HB 1257 in Washington State, which have set carbon/energy limits for existing buildings. Fines will be applied for exceeding these limits. They will start with the largest and worst performance buildings before expanding.

“This creates a large incentive to upgrade existing buildings. It improves the economics of envelope retrofits. Many owners would rather put money toward an improved building than to pay a fine to the mayor,” said Culp.

Stay tuned to USGNN™ for more coverage of the virtual NGA Summer Conference.