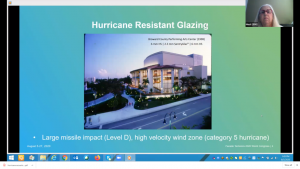 Safety, security and acoustic performance—all are benefits of laminated glass. But what happens when someone in hurricane-prone Miami, for example, in a busy high-rise neighborhood, wants glazing that combines sound control with the required hurricane performance? That’s somewhat of a challenge, according to Steve Bennison, a technology fellow with Kuraray, who discussed a new laminated glass technology for combining both hurricane and acoustic glazing technologies. Bennison explained that the polymer requirements are different for each type of application—hurricane and acoustical performance—which creates technical challenges. His presentation was part of the Façade Tectonics Institute’s (FTI) virtual World Congress, which kicked off last week.

Bennison began the discussion with a look at hurricane-resistant glazing, which is typically laminated glass. ASTM E1996 is the test method that simulates the damage that could occur during a hurricane from both small and large missile, as well as the type of cycling that can happen during a hurricane. PVB is commonly used as the interlayer in hurricane glazing and ionomer polymers are used for higher performance hurricane glazing to withstand highest impact loading. He showed the Broward County Performing Arts Center as an example of a large missile impact (level D) application located in a category 5 hurricane zone.

Turning to acoustic glazing, Bennison explained the interlayer in these laminated glass products is used to dampen the vibration.

“Most acoustic interlayers are PVB because it is a soft interlayer,” he said, adding that the acoustic performance does depend on the type of PVB; there’s standard PVB and two enhanced versions: a monolayer sheet and a trilayer sheet.

“Recently, there have been requests to have hurricane glazing that can also be used to provide acoustic barrier performance,” said Bennison. “This is especially so in dense urban areas located along the coastlines that are prone to hurricane events …”

However, as Bennison explained, the polymer properties for each function, hurricane and acoustics, are opposite.

“For hurricane-resistance you need a stiff, tough polymer, while for acoustic performance you want a compliant dampening polymer,” he said. “So, how do we optimize both properties in one product since ionomers and PVB are not compatible chemically?”

To address these considerations, Bennison talked about the development of a new interlayer technology. He explained the new multilayer polymer sheet has an ionomer outer layer for hurricane performance and a thermoplastic elastomer (TPE) core layer for acoustic performance. These polymers, he said, are both compatible and highly durable. He added that multilayer ionomer/TPE sheets may be combined with ionomer sheets as needed for higher hurricane barrier performance.

“Optimizing hurricane and acoustic barrier performance is challenging, however, the market is asking for products that combine both functions,” said Bennison.

The new interlayer technologies that are being introduced can help, as they combine both hurricane and acoustic barrier performance. Bennison added that the uses and performance go beyond hurricanes, as the technology also applies to laminate strength, post-glass breakage behavior, etc.

FTI’s World Congress will take place virtually on Wednesdays and Thursdays during the month of August. Visit facadestectonics.org to learn more or to register. Stay tuned to usglassmag.com for more reports and news from the event.