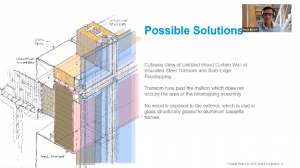 David Barber addresses how to design mass timber curtainwall so that it complies with the 2021 IBC.

The Facade Tectonics Institute’s (FTI) 2020 World Congress continued this week with paper presentations on a range of topics including lab testing of glazing system mock-ups and challenges for mass timber curtainwall systems.

The 2021 International Building Code (IBC) will allow mass timber for high-ride buildings up to 18 stories and, in the U.S., Washington, Oregon and Denver are all expected to adopt the 2021 code. However, the 2021 IBC does not consider the use of timber on the exterior of a building.

“The path for code compliance is difficult and fraught with potential misinterpretations and misunderstandings,” said Barber. “That’s partly due to the fact that we lack a lot of definitions around curtainwall and window wall systems. The code is very specific in defining what an exterior wall is, but not when it comes to modern window systems. Chapters 6,7,8,14 and 23 of the IBC all have an impact on timber curtainwall systems. There are a lot of code clauses that need to be worked through. There are a lot of conflicts within the code.”

One thing that is clear is that as window frames are not part of the primary or secondary building structure they do not require a fire resistance rating, which applies to timber curtainwall systems as well. However, one part of the code says they need to be completely non-combustible while other parts of the code allow for exceptions.

Barber said that the IBC requires steel and concrete structures above 75 feet but IBC 2018 Section 603.1 permits wood millwork, including window sashes and frames. Questions remain about how a window frame is defined and if a window frame is part of an exterior wall or is considered a structural element. However, Chapter 14 requires that none of these elements be combustible.

Barber and his co-authors wanted to design a system that would be considered code compliant.

“There is a path to do that and it relies on the timber being entirely on the interior of the building,” he said, adding that a lack of definition about which part of the curtainwall system is considered exterior and interior can become a problem.

He said that stopping the timber at the floor with a non-combustible system at the floor edge and then continuing the timber system afterward could meet the code. A possible solution is using an insulated steel transom and slab-edge firestopping, similar to zero-spandrel assemblies tested to ASTM E2307. This would be combined with a non-combustible system on the exterior.

Barber suggested that timber could be a solution as codes lower the prescriptive U-value. A typical unitized aluminum curtainwall system with double glazing, a low-E coating and argon fill has an overall U-value of around 0.35-0.40. Barber said that an equivalent system with timber mullions has a U-value of approximately 0.25. 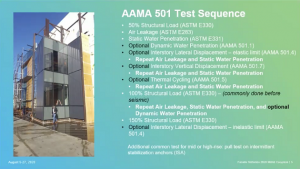 Andy Lang, principle and façade specialist with Morrison Hershfield, explained in his presentation, “Façade Mock-ups: Laboratory Testing of Glazing Systems as Part of a Quality Assurance Program,” that many projects don’t create project-specific, full-scale mock-ups due to the time and money it can cost.

“It can take several months for the planning and execution of a lab mock-up test,” he said.

Lang gave examples of mock-ups tested to the AAMA 501 test methods and how those lab tests revealed water penetration failures.

He explained that, regarding AAMA 501.4, Recommended Static Test Method for Evaluating Window Wall, Curtain Wall and Storefront Systems Subjected to Seismic and Wind-Induced Inter-Story Drift, it can be difficult to predict how a system will move during a seismic event and that testing is the only way to be sure. It’s also important to determine whether the system should be tested in the open position as well.

Lang recommends laboratory mock-up testing for all custom systems with no previous test data or systems that have any significant modifications or variations from previously tested systems, especially if they impact the way a system performs. He also recommends a full series of testing per AAMA 501 and ASTM E2099, including the dynamic water penetration and lateral (seismic) displacement tests.

The 2020 World Congress runs through Thursday, August 27 with sessions on Wednesdays and Thursdays. Stay tuned to USGNN™ for our continuing event coverage throughout the month.