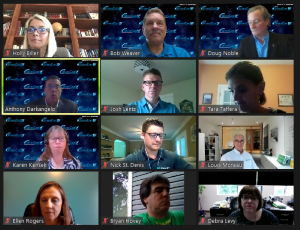 GlassCon Global VE-Glass Expo VE’s sessions provided a look at the industry’s latest innovations and trends while it’s exhibit hall brought attendees and exhibitors together virtually to exchange information in a new way. While most in-person meetings were cancelled this year, the industry is finding methods to connect and push forward together.

“There was so much more interaction than we could have ever hoped for …,” said Anthony Darkangelo, CEO of the Finishing Contractors Association (FCA) International. “… I was so excited because this [platform] was so different than anything I have ever seen before.”

Day two of the event began with morning yoga and meditation before opening up the virtual auditoriums for educational sessions and the virtual exhibit hall for booth visits with live access to representatives from 80 industry companies.

Jorma Vitkala explains that glass corners are the result of people’s desire for increased transparency.

Former GPD chairman Jorma Vitkala’s gave an overview of the trends that could impact the glass industry most based on recent GPD presentations. He emphasized how much of an impact digitalization will have on the industry, creating a higher level of productivity than electrification and automation have so far.

Other trends include an increased interest in timber curtainwall in the U.S., the desire for glazing systems to be as transparent as possible, more complex facades incorporating bending and screenprinting, free standing balustrades to create unobstructed views, transparent structural silicone, more renovation to improve existing buildings’ energy efficiency, BIPV, smart windows and efforts to mitigate anisotropy. 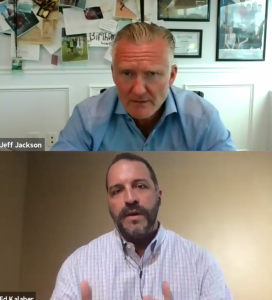 Panelists Ed Kalaher, president of Window Depot, and Jeff Jackson, president and CEO of PGT Innovations, reflect on the past six months amid the COVID-19 pandemic.

In a session titled, “The Door and Window Industry in a Post-Pandemic World,” panelists Ed Kalaher, president of Window Depot, and Jeff Jackson, president and CEO of PGT Innovations, reflected on the past six months amid the COVID-19 pandemic. Looking forward, both panelists admitted that it’s become more or less impossible to stick a dart in which way the market is heading, though both remain confident after seeing how housing and remodeling have held up. In an election year and with stimulus efforts fading, both agreed that there are no definitive answers.

Regarding how the pandemic is expected to change their companies, both agreed that virtual formats will likely remain a part of doing business. Regarding video conferencing, “To be honest with you, it drove me crazy in the beginning,” Jackson admitted, adding, “But I think it’s here to stay. These virtual meetings are just more efficient and easy.”

Kalaher said the technology has actually increased camaraderie among his employees.

This week is National Suicide Prevention Week in the U.S. but Jeremy Fitch, director of communications for FCA International, says suicide prevention is one of the organization’s major initiatives year-round.

“One of our founding fathers lost his son to suicide years ago. Since retiring from his business, he’s made it his mission to educate the industry. Construction’s suicide rate is four times that of the general population,” he explained. “We work with him to do regular blog posts to raise awareness of the issue and to help employers understand what they can do.”

Fitch says physical strain is one factor leading to higher rates in construction, but not the only factor.

“Additionally, irregular schedules and a ‘tough guy’ culture where people are considered ‘weak’ or ‘crazy’ if they talk about their mental health struggles are major factors,” he added. “One of the key things we try to stress is that mental illnesses are an illness of the brain, just like a heart disease is an illness affecting the heart. We should treat them both the same.”

Many exhibitors were focused on making connections and learning how they could meet potential customers’ needs.

Jesse Moy, a sales representative for Groves Inc. said, “… We had some time to connect with and catch up with some of our other industry associates, discussing different trends in the industry. We sponsored the virtual wine tasting [Wednesday], which was pretty cool.”

Dylan Carpenter, account executive at MyGlassTruck, said his company is focusing on keeping glass trucks in stock with its dealer network across the U.S.

“This has helped get our customers the trucks/equipment they need much quicker. We knew most of the country would be dealing with supply chain delays so we tried to get ahead of this before that …,” he said. “… The West Coast is always a big focus of ours though as we are a New Jersey-based company. We have seen a big jump in customers from California and generally on the West Coast in the last few months!”

“The last three months have been great for sales in the U.S. The sales we have had, have been with our new machines, including robots and the technologies of our A-WR. These machines can run with less people and more companies are having a problem with getting good help,” he said, adding that automation helps to keep people spaced out on the factory floor. “And then there are companies that got the PPP loan and are updating their machines.”

The virtual event was co-organized by FCA International and USGlass and [DWM] magazines.