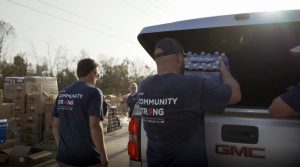 PGT Innovations, manufacturer of impact-resistant door and windows, held a drive-thru Hurricane Laura Relief Supplies Distribution Event in Lake Charles, La., on Wednesday, September 2. The Florida-based company provided emergency supplies to those affected by the recent Category 4 hurricane in a continuation of its 15-plus-year history of post-hurricane community support, according to the company.

Two semi-trailers loaded with the relief supplies set out on the 900-mile journey from Venice, Fla., to Lake Charles on Monday, August 31. The truck drivers and seven PGT Innovations team members, alongside 18 Doug Ashy employees, unloaded and staged the supplies to create a drive-thru loading route through the Doug Ashy Building Materials’ parking lot. The recipients remained in their vehicles while the relief supplies were loaded for them, resulting in an efficient and organized distribution process, while also supporting COVID-19 social distancing efforts to protect volunteers and those receiving the relief supplies, according to the company.

More than 750 area residents drove through the distribution line over seven hours, while supplies lasted. Commodity items and non-perishable food items were also made available to the public. The remaining supplies – primarily water and tarps – were provided to residents of the Cameron Parish, La., area, where Hurricane Laura made landfall early on August 27.

“When a storm impacts any of our neighboring states—whether along the East Coast or across the Gulf, our team is compelled to help however we can with relief efforts to aid those families affected,” says Jeff Jackson, president and CEO of PGT Innovations. “As a company headquartered in Florida, we have seen the devastation that these incredibly powerful weather events can leave behind. Our goal is that the support and supplies we provide will help residents know that they are not in this alone; that there are companies and organizations that will be there to help them rebuild their homes, their communities and their lives.”

PGT Innovations has donated emergency supplies or mobilized teams to send aid during several storms, such as Hurricane Dorian in the Bahamas, Hurricane Michael in Florida’s Panhandle, Hurricane Irma in Southwest Florida and Hurricane Florence in North Carolina.

“It’s truly remarkable what PGT Innovations has done,” says D.J. Ashy, president of Doug Ashy. “Words can’t even explain how gracious we are that they came and helped with this event. It’s terrible to see what’s happened out here, but it’s uplifting to be able to do this for people.”