As Employment Climbs Back, Study Shows Trade Schools Neck in Neck With Colleges 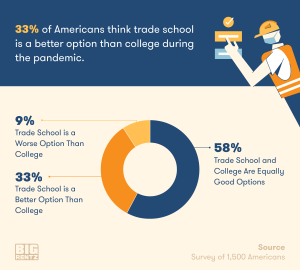 After spiking at nearly 15% in the early parts of the COVID-19 pandemic, U.S. unemployment settled to around 8% in September, according to the U.S. Bureau of Labor Statistics (BLS). As employees return to the workplace, notable job gains occurred in recent weeks across leisure and hospitality, retail trade, health care and social assistance. But a recent study indicates that more individuals could land in trades-based positions going forward, as the effects of COVID-19 shift attitudes about post-secondary education.

As companies and organizations work to raise awareness for trades-based careers amid labor shortages and four-year institutions suddenly find themselves in the hot seat for campus-based outbreaks and even lawsuits, a study commissioned by equipment rental firm BigRentz and conducted by Siegemedia indicates that the pandemic might be changing perceptions. In 2019, a survey showed that many young people were skeptical about the option of trade school, but a current survey of 1,500 Americans now shows that one-third view trade schools as a more favorable option than going to college. Only 9% viewed vocational schools as a worse option, while 58% found the two to be about equal.

Behind those shifts is a robust job market, researchers suggest. Between July and August 2020, the construction industries added 33,000 jobs, tacking on another 26,000 in September. Meanwhile, in September, BLS also reported that 19.4 million people said they had been unable to work because employers had closed or suffered from decreased demand due to the pandemic. As a result, many of those who are employed said they didn’t work at all, or that they worked fewer hours. Combined with construction and manufacturing sectors that show a constant need for labor, trades-based careers appear to be gaining the attention of more job seekers, officials for BigRentz suggest.

Among the benefits cited by those now favoring trade school were less debt (cited by 35%) and better chances at finding a job (30%). At the same time, 16% of respondents said they felt trade schools lead to better paying jobs than those facilitated by college.

Even with recent turns in unemployment, plenty of opportunities remain for glass and glazing companies to capitalize on those perceptions. Currently 12.6 million Americans remain unemployed, BLS reports, and the number of persons in search of jobs remains at around 7.2 million—2.3 million higher than February.