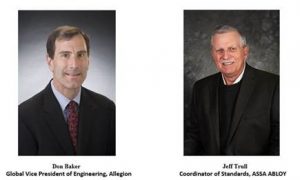 The Builders Hardware Manufacturers Association (BHMA) has named two winners of its Richard A. Hudnut Distinguished Service Award: Don Baker, global vice president of engineering at Allegion, and Jeff Trull, coordinator of standards at Assa Abloy. The announcement was made during the association’s annual meeting, held virtually this year.

This award recognizes exemplary performance by individuals identified by their peers as having consistently demonstrated integrity and a strong commitment to the standards and code development process of BHMA and the builders hardware industry.

“The major contributions that both Don Baker and Jeff Trull have made to the quality and integrity of the BHMA standards development process led the association to award both of these longtime BHMA members this honor,” said Ralph Vasami, BHMA’s executive director. “Their dedication has helped the association further its mission of advancing building safety and security.”

Baker was cited for being “engaged at a myriad of levels within BHMA for many years and for being instrumental in the development of many standards as well as the advancement of the organization.”

Accolades for Trull’s nomination focused on his superb relationship building skills: “While working within the industry of architectural hardware manufacturers, he applies his knowledge and expertise by ‘answering the question that has not been asked.’ He applies a historical perspective, good organizational skills and clear communication to a wide variety of topics and situations.”

“This new award was created to honor Dick Hudnut, who was responsible for setting the processes that guide the vigorous Standards Development Program that BHMA follows today,” said Vasami. “Dick was our first Standards Coordinator—a position he held for 30 years. His legacy to BHMA and to the builders hardware industry as a whole is why we created this award.”