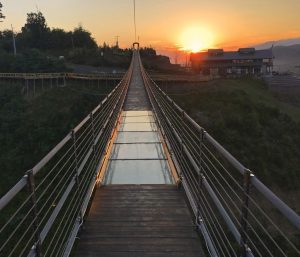 Glass bridges are growing in popularity around the world and Gatlinburg, Tenn., is no exception. Gatlinburg SkyLift Park leadership decided to add more glass panels to its Gatlinburg SkyBridge at the time the bridge opened in May 2019. This work was completed in August 2020, expanding the number of glass panels from three to six. Glass now makes up 30 feet of the 680-foot bridge.

“We quickly realized that guest reaction was so positive, leading to the glass being the focal point/thrill of the bridge,” says Marcus Watson, marketing manager for the park.

Engineers with Experiential Resources (ERi) helped to coordinate the glass addition. Mandy Stewart, CEO and co-owner of the company, says 310 Tempering fabricated the panels and C.W. Miller Glass completed the glazing process for final installation. Each panel is 5 by 5 feet and includes three 3/8-inch low-iron tempered glass lites with SentryGlas interlayers from Kuraray. Each panel is 1 ¼-inch thick in total. 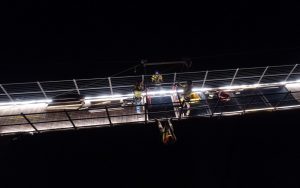 Stewart says that accounting for uplift in the valley in which the panels were installed without mechanical fastening to hold down the panels was a challenge.

“Installation itself requires the panels to be transported in tight quarters on the hillside beside the SkyBridge entry, plus installers were working while hanging on the underside of the bridge,” she says. “Additionally, in order to keep operations uninterrupted, all modifications to the sub-frames on the bridge as well as the installation itself needed to happen at night.”

The original glass handled more than one million visitors in its first year, according to Stewart, who adds that the glass continues to wear well. However, the park did have to repair one of its glass panels in June after a guest “attempted a baseball-style slide across the glass.” A metal object on the guest’s clothing caused the panel’s protective layer to crack, according to a report from Knox News. 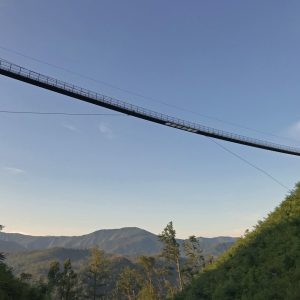 Watson says the park does daily checks of the bridge to ensure it is safe for guests.

“If there was even a slight thought that it may not be suited for another day of operations, we would not open,” he says. “Safety of the guests and employees has always been the number one priority at our attraction.”

The bridge is 150 feet above the ground at its midpoint and, according to the SkyLift website, Gatlinburg SkyBridge is the longest pedestrian suspension bridge in North America.

“[The reaction] has been overwhelmingly positive since we doubled the glass panels. The glass on the bridge has been and still is the focal point/thrill of the SkyBridge,” says Watson.

Could more glass be in the SkyBridge’s future? Watson says that while guests would love more glass, a decision to add more would have to come after a conversation between the park’s corporate team and the bridge engineers.