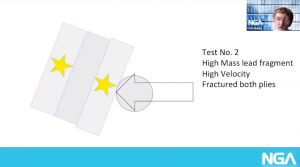 Chris Barry explains how he simulated the glass impact to determine whether the Warren Commission’s findings about President Kennedy’s assassination are correct.

Conspiracy theories about what happened on the day of President John F. Kennedy’s assassination have been in abundance for decades, but an encounter at the Smithsonian led glass consultant Chris Barry to analyze whether a second shooter could have been involved. He discussed his analysis during the GlassBuild Connect event in a session titled, “The Glass Evidence for a Second Shooter.”

Barry was in Washington, D.C., to help the Smithsonian determine how to best protect the Declaration of Independence and U.S. Constitution in new protective glass cases when someone asked if he could help move some cracked glass. Barry told them he didn’t want to make a special trip out later to help and advised them to move it carefully. That was before he found out that the glass in question was the windshield from the Lincoln Continental in which President Kennedy was assassinated in 1963.

While helping to move the glass, Barry said that he couldn’t believe his eyes. There was a crack on the front of the windshield, but not on the back.

“Even I knew that the gunman had fired from behind. If glass had broken surely it would be the interior [side of the] glass,” said Barry.

The discovery led him to find a copy of the Warren Report, the official report on the assassination. Other theories are included in the report but they are carefully examined and dismissed, according to Barry.

Barry decided to conduct simulations to determine if this finding was correct since laminated glass in particular was not discussed in the report. He got some old laminated windshields and set them up in his basement. All tests were conducted facing the inside lite of glass.

Barry determined that there was no front-surface impact and that the Warren Commission findings are correct despite neglecting to give a detailed description of laminated glass breakage.

“We can all sleep easy in our beds at night knowing there is no second gunman on a grassy knoll or overpass,” he said.

6 Responses to Glass Evidence: Was A Second Shooter Involved in President Kennedy’s Assassination?