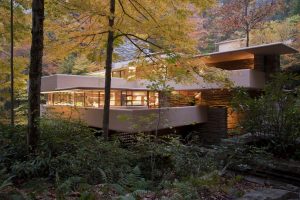 In 2019, the Western Pennsylvania Conservancy, owners of Frank Lloyd Wright’s Fallingwater, sought to complete restoration work on the windows and doors of the architect’s celebrated masterpiece. The organization turned to Vitro Architectural Glass (formerly PPG Glass) and Starphire Ultra-Clear glass.

One of Wright’s primary goals in designing Fallingwater was reducing the visual barrier between the inside of the house and its iconic location above the falls of Bear Run in Pennsylvania’s Laurel Highlands. In 1934, this goal guided Wright’s decision to specify now-discontinued Waterwhite glass, a low-iron glass that PPG Glass (now Vitro Glass) had recently introduced to provide increased transparency.

Since Waterwhite glass is no longer made, today, the staff of Fallingwater relies on its more sophisticated successor, Starphire Ultra-Clear glass. Manufactured by Vitro Glass using a proprietary low-iron formulation, Starphire glass has been chosen by the Conservancy for all of Fallingwater’s window glass replacement projects over the past few decades.

The last major round of window preservation took place in 2015, yet, in 2019, the Conservancy determined that 69 of Fallingwater’s window and door sashes needed to be repaired, including 16 windows that required complete glass replacement. The Conservancy specified Starphire glass with a SentryGlas interlayer by Kuraray, which offers five times the strength of ordinary laminating materials and simultaneously protects the wood and artwork inside the house by limiting exposure to ultraviolet light, according to the company.

“The clarity of the glass allows for it to appear invisible, a feature Wright admired,” says Scott W. Perkins, director of preservation and collections for Fallingwater.