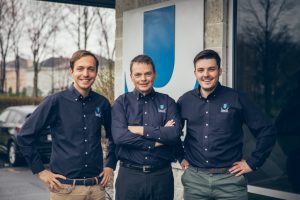 “The buyout was an important and significant milestone in the next chapter for Unicel Architectural,” says Jean-François Couturier. “Vincent and Samuel needed time to learn the business and bring a new level of experience, integrity and effective execution in their focus on future growth and innovation. Vincent and Samuel will continue to be guided strategically by Jean-François Tremblay, appointed as general manager in 2019 by the board of directors established by Desjardins Capital.”

“We are proud to become together majority shareholders of Unicel Architectural, a growing company which has practically doubled its revenue since 2017, thanks to the vision of our father and dedication of our hard-working employees. We also recognize and are grateful to Desjardins Capital, the contribution of which has made our entrepreneurial dream a reality, and this under winning conditions,” add Vincent Couturier and Doyon-Bissonnette.

“The buyout of the shares by two members of Unicel Architectural’s executive team and members of Jean-François Couturier’s family is a perfect illustration of our business model which consists over the long term, of enhancing, supporting and keeping the flagships of

Quebec,” says Yves Calloc’h, COO of Desjardins Capital. “Desjardins Capital granted a loan to the company to complete the business transfer, support the growth plan and thus remain the partner of choice for Unicel Architectural. Another source of satisfaction for us is the maintenance of the board of directors that we put in place in 2017. Indeed, the quality of governance of our companies is a guarantee of sustainability, which is as important as the financial support that we provide.”