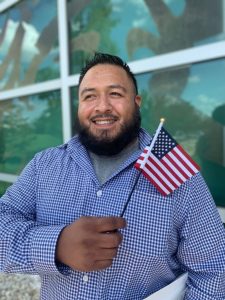 Hector Garcia is a project manager at Accura Systems in Sunnyvale, Texas. He’s also a husband, a father, a college graduate and now he’s a U.S. citizen. Garcia emigrated from Mexico to the U.S. with his parents as a child. Since then he has spent nearly two decades growing his career in the glass industry. With the support of his family and an industry mentor, Garcia began the long journey to citizenship, which he completed last month, just in time to fill out a provisional ballot for the election.

“I’ve always given this country 100% with my work ethic and the way I raise my family with good morals and good character,” he says. “… I’ve checked off one of my goals and it’s a great feeling officially being part of a country I’ve known all my life.”

Garcia’s first job in the glass industry was in 2003 at Vistawall, which is now part of Oldcastle BuildingEnvelope®. His 2-year-old son was sick and he needed a job so Garcia signed on for a two-week temporary assignment with the company.

“There was a crew of five of us and at the end of the assignment they acknowledged our hard work. I had my foot in the door and they had a position available,” he says, explaining that he eventually became a night shift supervisor.

Garcia worked at the company for eight years. During that time his mentor, Todd Staley, encouraged him to get his GED and, later, his associate’s degree in management. Staley left Vistawall to work for Acralight Skylights and Garcia joined him. However, the Texas location closed down in 2013, leaving Garcia without a job. Staley reached out to Mike Rubner, chief operating officer at Accura Systems, and asked if he could help Garcia.

“He asked if Mike could give me something temporary until something opens up. I worked here for not even a year and these guys acknowledged my hard work,” he says. 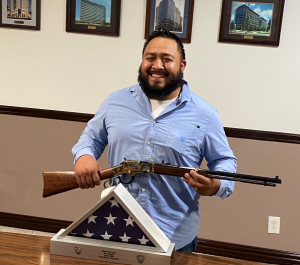 To celebrate Garcia’s citizenship, the Accura team presented him with a personally engraved Henry Rifle.

Garcia began working in the fabrication area of Accura’s manufacturing group. He rose through the ranks quickly, becoming the second shift supervisor while raising three children with his wife, Mary, who also works at Accura, as does Garcia’s brother, Abel. During this time, both Mary and Garcia were attending college classes at night.

“After excelling in manufacturing leadership, Hector moved into the office as a project coordinator where his passion and drive was appreciated by customers, vendors and fellow employees alike. In 2017, Hector again rose to the occasion and was promoted to project manager,” says Rubner. “Hector currently is handling two of our largest projects, UTSW in Dallas (a 150,000-square-foot unitized project with over 1,000 units) and Domain Tower in Houston (a more than 200,000-square-foot building with nearly 4,000 curtainwall units).”

Garcia says he never expected to become project manager because he thought he would need a bachelor’s degree.

“The company has shown me that hard work, experience and the right attitude can accomplish that,” he says. “As soon as I got my associate’s degree, the guys felt I was able to take on that role.”

“It was nice to reconnect with him. He’s the one who pushed me to start college and to start the citizenship process back in 2011. It’s pretty amazing that he was there and he continues to support me,” says Garcia.

To celebrate Garcia’s citizenship, the Accura team presented him with a personally engraved Henry Rifle and the flag that was flown over the Capitol on the day he was sworn in.

“He and Mary are truly some of the finest people you would ever want to meet,” says Rubner. “We engraved his Henry on the CNC machine we make curtainwall parts on. It was a little bit of a challenge keeping it a secret.”