Are Glass Coatings Getting Better with Age? 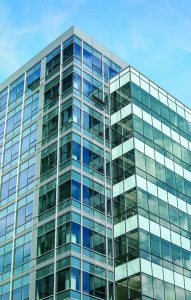 Solarban z50 glass and Solarban 72 on Starphire glass from Vitro Architectural Glass were used in the glazing systems in the CollinsWoerman-designed Urban Union office building, part of Amazon’s Seattle headquarters. Hartung Glass industries was the fabricator and All New Glass was the glazing contractor. Photo: Tom Kessler

The development of low-E coatings in the 1970s was a game changer for architectural glass. It provided a means for builders, developers, architects and specifiers to use an abundance of glass, while keeping occupants comfortable and without concern of increased energy costs. Glass also become clearer, as in the past, it often had to become darker to provide the same comfort and performance. Low-E coatings, however, were an early step toward reducing the amount of ultraviolet and infrared light that passed through glass while still maintaining visible light transmittance (VLT). And that was just the beginning. With subsequent advances in higher performing products came a drive in the codes for even better glazing products. And today, it’s quite likely that no new building would meet codes without the use of coated glass.

Glass coatings have evolved to not only offer improved energy performance, but are also clear and more transparent. And, they continue to advance, paving the way for future developments.

Today’s coated glass has come a long way since the early days of low-E. Technologies have continued to evolve and there are hundreds of options for individual locations and climate zones, as well as aesthetics.

“The glass world has been dominated by the Magnetron Sputtering Vapor Deposition (MSVD) coating realm,” says Nathan McKenna, director of marketing and innovation with Vitro Architectural Glass (formerly PPG). “[MSVD products] dominated the technology and development, and part of that is every time the code changed you needed a higher performance glass… to reach those numbers in the climate zone.” He explains that within the codes, it’s the Solar Heat Gain Coefficient (SHGC) and U-value that have become increasingly stringent.

According to Tim McKittrick, the sector manager for thin film photovoltaics at Pilkington, architects are focusing on thermal performance of glass coatings—maximizing daylight transmission while minimizing solar heat gain and having good U-value performance.

“Thermal performance is the most important feature of coated glass. Whether that’s achieving excellent U-values in heating dominated regions or attaining low SHGCs in cooling dominated regions, the comfort of the occupants and the associated energy costs of maintaining that comfort are the key factors for commercial buildings.”

Alissa Schmidt, architectural design and technical services manager with Viracon, points out that while the general idea of high light transmittance combined with solar performance to optimize a building’s energy efficiency isn’t new, there’s been an increased focus on balancing the two.

“As a result, coating development has been highly focused on pinpointing specific light transmittance and SHGC requirements,” she says.

While coatings have advanced to become increasingly high performance, they have also evolved aesthetically. Leigh Anne Mays, eastern regional architectural manager, with Guardian Glass, says the changes and developments in coatings follow a similar trend as the fashion industry.

“Architects want to change. They don’t want the same glass color palettes,” she says. “Right now we’re seeing more interest in gray/blue, but they want a subtle appearance, in the mid-reflectivity range. They’re looking for something to give a little more shimmer but not overwhelming.”

“Architects love gray, so there’s definitely a shift to wanting the gray/neutral colored coatings while avoiding the green tint of some of the higher performing coatings,” she says. “Using low-iron glass is very popular to help reduce some of the green tint.”  However, she says even with coatings that have a neutral gray appearance, “I think there will still be demand for something even more neutral gray, without having to use a tinted substrate and lose that reflectivity that gives the vibrant appearance.”