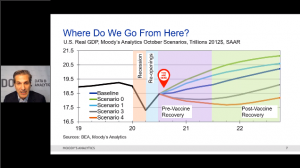 A full U.S. economic recovery depends on many factors, but one of the things Cris deRitis, deputy chief economist for Moody’s Analytics, can say for certain is that the labor market structure is changing. He presented a general U.S. economic outlook for 2021 during the Dodge Construction Outlook 2021 Virtual Conference last week.

The U.S. economy saw modest growth in GDP last year, up approximately 2.3%. However, there was a 10% drop in output at the beginning of the pandemic as states shut down.

“By May, June and July states were already reopening parts of the economy,” said deRitis, explaining that there was a better understanding of the virus. “We had a favorable third quarter with substantive economic growth but it’s still 40% below where we were at the start of the year. We’re not in a recovered state in any stretch of the imagination.”

deRitis and the Moody’s team came up with COVID-19 economic exposure scores for different geographic locations in the U.S. based on infections, demographics, commuting patterns, population density, industrial mix and income levels. The overall U.S. score was set at zero. The scores created a U-shape, showing that the coastal areas and the Southern U.S. are more exposed. However, deRitis explained that the scores are a snapshot in time and show the risk levels in October 2020. He added that the highest risk areas won’t necessarily be the ones growing slowly.

“They’re more likely to accelerate. Las Vegas and Orlando, places with heavy hospitality, are likely to bounce back at a higher pace,” he said.

“There are many challenges ahead but the future looks a bit brighter today with the vaccine news,” he said. “… We’re assuming the economy will still struggle for another quarter or two before the vaccine kicks in late first quarter or second quarter.”

His forecast relies on four assumptions, though there could be unexpected events that impact the forecast. The four assumptions are the trajectory of the virus, fiscal stimulus, interest rates and asset prices.

deRitis explained that the U.S.’s economic future is still tied to the pandemic. He acknowledged that infection rates have been increasing over the past few weeks and that they are expected to remain elevated for a while. The uncertainty can impact consumers’ confidence and mobility.

“Consumers and businesses have been fairly resilient to the latest wave of infections. Activity is still going on and people are adapting,” he said, adding that things could change if the infection rate grows very high.

Job gains have been positive but slow, explained deRitis, who said that at the current pace, it could take several years for employment levels to be back where they were at the beginning of 2020. He pointed out that labor force participation has fallen as many women have exited to handle child care, which has become a fundamental issue.

He added that the labor market is not homogenous. There’s a lot of variety across different geographies and industries. The leisure/hospitality industry was hit the hardest, losing 8.5 million jobs in April. In comparison, the construction industry lost over a million jobs at that time.

“Then, unlike other industries, it recovered very quickly. It’s a brighter spot in the economic outlook,” said deRitis, who warned that, while it’s made progress, there are still a number of jobs that have not recovered.

He expects a K-shaped recovery for U.S. builders, meaning that there are differences depending on subsector. Construction of residential homes is above its January level due to an increased demand for housing, but public infrastructure and private manufacturing, infrastructure and education are the subsectors hit the hardest.

The CARES Act provided $2.2 trillion to help households and small businesses. According to deRitis, total disposable income actually grew and offset losses due to the stimulus. He said it prevent a worse backslide, but the funds have run out and additional stimulus is needed.

“Without additional stimulus or the recovery of the job market, some people are at a real risk of falling behind on rent payments and other obligations that could lead to a further down draft of the economy,” he said. “For this reason I expect to see Congress and the new administration come together with some support but probably not as much and it’s likely to be more targeted. We think it’s necessary to bridge the gap as the vaccine comes online.”

deRitis said that interest rates are the easiest thing to predict as the federal reserve has made it clear that rates will remain low for some time.

“They are willing to tolerate some inflation above 2% if it creates jobs and allows the economy to heal,” he said, adding that rates should remain near 1% through 2023.

He said low interest rates are beneficial for the economy as they encourage spending and investment, but they could also cause people to invest improperly.

“Home prices have been robust. Some would say surprisingly robust,” he said, explaining that the U.S. average year-over-year home price increase in August was 5.7%.

While prices have increased, deRitis said demand is robust and he doesn’t see risk at the moment of a bubble bursting. However, there could be pockets to focus on such as Arizona, which has seen a year-over-year increase of close to 10%. 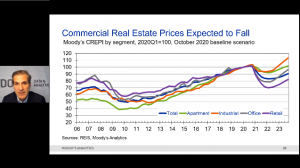 deRitis’ forecast calls for a slowdown in commercial real estate, particularly in retail and offices as people shift to online shopping and working from home.

deRitis said there is more of a concern on the commercial real estate side as prices had risen rapidly over the past decade. His forecast calls for a slowdown in commercial real estate, particularly in retail and offices as people shift to online shopping and working from home. However, this is leading to an increase in data center and warehouse construction.

One upside is the potential for a revival in entrepreneurship as new business applications are at a record high.

“Consumers can unleash their savings when they feel confident,” he said. “This could lead to entrepreneurial growth and job growth in the latter half of 2021. That’s the more optimistic side. We should be supportive and hopeful that businesses take off and support the economy.”

The pandemic has accelerated the online shopping and working from home trends and deRitis said it will take time for the labor market to adjust and absorb.

“We should be prepared for it to be a longer period of time before we fully employ everyone back in the economy,” he said.