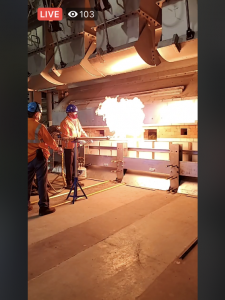 NSG Group held a furnace lighting ceremony at its new plant in Luckey, Ohio, today, starting up the company’s first new float glass line in the U.S. since 1980. The new 500,000-square-foot facility will begin operating next week and will have a melting capacity of 600 tons per day. The plant will add approximately 150 new jobs to the area.

The new glass production facility was built to expand the production capacity of transparent conductive oxide (TCO) coated glass to support the growing solar market. The investment is part of a long-term supply agreement with First Solar Inc., based in Tempe, Ariz., which operates the Western Hemisphere’s largest photovoltaic (PV) solar manufacturing footprint in Northwest Ohio, according to NSG Group.

Dan Knecht, plant manager of the new facility, opened the event, which steamed live on Facebook, by thanking the NSG Group team and all of the employees and associates who made the opening possible.

Dick Altman, regional director of architectural and solar glass North America for NSG Group, said that in his 41 years with the company, this is the first time he’s had the privilege to light a new furnace. He described the event as an exciting time for the company.

“This project represents a key milestone for us in our strategy to grow our business by meeting the unique requirements of customers and making sure that we add value to their businesses,” he said, adding that the facility is part of an approximately $350 million overall investment by NSG Group to support the growing solar market.

The company restarted the operation of one of its float furnaces near Ho Chi Minh City, Vietnam at the beginning of 2020. The line was upgraded to expand the company’s production capacity of TCO coated glass for solar panels.

Michael Koralewski, chief manufacturing operations officer for First Solar, spoke next, focusing on how, with the addition of this float plant, Ohio contains the entire PV product chain.

“These are the modules that power projects both big and small across the United States. They’re sitting in community centers, schools, data centers and factories. These modules are going to help power America toward a cleaner and more sustainable energy future,” he said.

Altman then lit the furnace and informed attendees that NSG would host a proper open house once the pandemic situation allows.