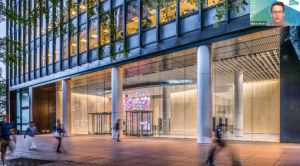 Modern structural glass facades are incorporating larger glass panels and less hardware than ever before. While the aesthetic creates maximum transparency, it does present a design challenge when it comes to accommodating for seismic drift. Richard Kaire and David Dunham, engineering manager and director of business development, respectively at Sentech Architectural Systems, provided some solutions to this issue during their presentation, “Seismic Design of Jumbo Glass Structures: Interstory Drift Analysis of Modern Facades,” during Façade Tectonics Institute’s 2020 World Congress.

Kaire explained that, until a few years ago, glass manufacturing limitations restricted panel and fin sizes. Fitting hardware and numerous internal system joints were required to support the system. However, in the past decade, technology has allowed for increasingly larger panels and minimal or concealed hardware.

“The only distinction between the interior and the exterior are the entry doors within the wall and sparsely spaced vertical sealant joints across the opening,” he said.

The result of these trends are stiffer glass walls in plane due to the number of joints being minimized and the use of structural silicone, which helps to transfer loads back to the fins or other support elements. Kaire said this planar stiffness has created a system where the performance is dependent on insuring that the joints aren’t stretched beyond their limitations and that they provide maximum load resistance. 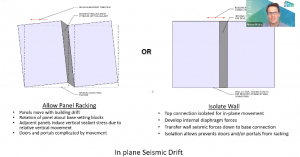 “The dead load system at the head or the base is very important to the design to ensure that adequate stiffness is built in to mitigate racking and create even and accurate joints,” he said. “For most all systems, out of plane drift can still be accommodated by allowing translation at the head and pivoting about the base, causing the wall to rotate out of plane as the building deforms.”

To address in-plane drift, there are two typical design methods. The first option is to connect the base and head of the wall to the structure and to force the panels to rack as the building moves. In this scenario, joints are sized to stretch and the glass’ engagement is detailed to ensure there’s no fallout or collision. The second option, which Kaire said is being incorporated more, is to isolate the façade completely from in-plane movement at one level, detailing sliding brackets that allow movement along the wall direction while still resisting loads out of plane.

“The glass fall and collision are still a concern, but those typically are addressed at the perimeter connections where relative movement occurs between the building and the façade wall,” said Kaire.

Dunham explained that the seismic design of facades with jumbo panels creates challenges because it’s flexible out of plane of the façade but is extremely rigid in plane. 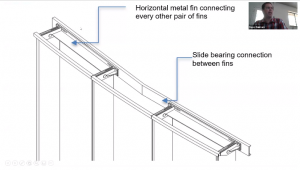 Dunham said he’s focused on how to accommodate drift rather than the seismic load applied to the panels because the panels themselves can handle those seismic loads adequately. He explained that facades with smaller glass panels typically transfer seismic loads in plane through the façade itself. To isolate it from the building was a matter of adding slots to the base plate in plane of the façade. As the glass panels get larger, the slots must also get larger. Dunham said it’s not uncommon to have larger projects where there’s close to 12 inches of drift or beyond.

“The space to accommodate slots quickly goes away and becomes impractical,” he said.

Dunham gave an overview of several design solutions, such as slide brackets in which the base plate is not bolted to the structure, but instead captured in a Teflon-coated slide bracket. This allows the building to rack without causing added stress.

Another challenge is seismic design for curved and complex geometries. In these cases, Dunham said his company breaks the façade down into individual units by tying two fins together with a single bracket, which can be isolated from the building movement within its plane but move with the building out of plane. The next two fins in the façade are also connected, but at a different primary angle or axis, creating what Dunham called separate “mini facades” that go around the curvature.

Cantilevered fins with tall glass panels create another issue and Dunham said the attachment complexity becomes more difficult, but it can be achieved with a unique slide bracket design.

“There are different approaches, but using the glass as structured to accommodate its own loading in seismic events to isolate it from the building movement has allowed for much larger facades that can support very high drift criteria,” he said.