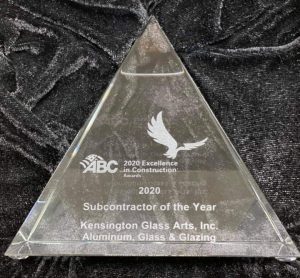 For the second year in a row, Kensington Glass Arts (KGa) was awarded the Associated Builders and Contractors (ABC) of Metro Washington’s and ABC of Virginia’s Excellence in Construction award for its workmanship in the subcontractor space throughout the region from June 2019 to June 2020.

The ABC award is defined as a competition that serves to raise the level of construction standards throughout the industry by recognizing the workmanship of those who contribute and by showcasing the results of their dedication. Teamwork and cooperation between general contractors, specialty contractors and material suppliers are prerequisites for building excellence into any construction project.

“This was completely a team effort. There were multiple projects that received awards for various things that we participated in. I would acknowledge the entire KGa team. This is recognition that everyone within the company deserves,” says Jim Rathbone, senior vice president.

The ABC awards are handed out yearly in regions all over the United States and this year the award program was completed in a virtual setting.

Kensington Glass Arts has been a full-service glass and glazing operation for more than 40 years.  One specific area in which the company stood out was its certification by the North American Contractor Certification (NACC) program.

“Our participation in the NACC program fits well with our desire to provide quality workmanship and successful projects,” says Rathbone. “The NACC program has enabled us to focus on the processes, procedures and cornerstones that build that outcome. Paying attention to the right things always bring the desired results and the NACC helps make that stay in the forefront.”