Putting on a Façade: Installation Differences Between Curtainwall and Window Wall Systems 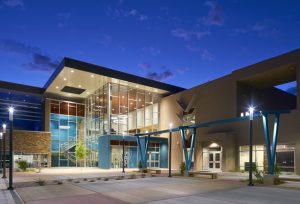 Window wall and curtainwall have structural differences that affect the applications for which they are suited. With these differences come several installation and design considerations that are important for glazing contractors to understand, especially upfront in the design-assist phase when they can steer system decisions.

Different companies have different definitions of curtainwall and window wall (also known as ribbon windows). Spencer Culhane, senior building envelope specialist at Schüco USA of Newington, Conn., offers his company’s definitions: A curtainwall is any façade assembly that is suspended in front of the superstructure of the building and a window wall is any assembly that is load-bearing or deadloaded to each level of the structure.

“For curtainwall, think of a continuous wrapping applied to the skeleton of a building’s structure. It’s unbroken and continues along the rise and width of the whole building, uninterrupted by the structure … It hangs like a curtain,” he says. “… Window wall systems are very common in concrete slab construction. On the edge of the floor, you’re resting and erecting continuous windows horizontally, but they only span floor-to-floor with the slab dividing the system.”

Culhane points out that the system includes the framing, glass and operables. Façades with window wall systems may include slab edge covers, façade paneling or spandrel glass, but the structural part of the system is what matters.

Tom Mifflin, director of marketing for Tubelite of Walker, Mich., says the optimal and most economical system largely depends on where the project is located and who is available to install it.

“For some, window wall [when compared to curtainwall] is inferior and less of a high performance product,” he explains. “That’s not the case [for us] and a few other companies on the market.”

Trainor adds that many people believe window wall is also a cheaper product, but that depends on the project. Curtainwall is good for projects with steel structures or high spans between floors while window wall is better for concrete structures and small spans, according to Trainor. This is why window wall often is used for hotel and residential projects while curtainwall is used in large office projects where an HVAC system needs to be hidden.

He points out that trying to use a window wall when there’s 14 feet between floors could result in a cost higher or equal to using curtainwall, which is already designed to accommodate that distance.

Earl Patrick, executive designer for Enclos of Eagan, Minn., says that if the two system types are designed correctly, there should be no difference in performance. He says it can be difficult to achieve the same air infiltration values with window wall as with curtainwall.

“Though you could make the argument that window wall doesn’t perform as well seismically,” he says, adding that curtainwall isn’t pinned between two slabs like window wall.

“Another important performance consideration is the inter-story movement, which is determined by loads from the building structure, occupants, walls, equipment, column foreshortening, creep, and thermal expansion and contraction. When inter-story movement requirements exceed +/- ¾ inch, window wall systems should be carefully reviewed, or curtainwall systems should be considered,” he says.

“Curtainwall can have panels that start inside but are then swung into the exterior, craned into position and then hung,” says Culhane. “Curtainwall installation requires a hoist mechanism on the outside of the building to hang the panels on the exterior. Window wall systems don’t have the same requirement and are installed on the inside from each floor level, though a glazier may need to go to the exterior for slab edge covers.”

He explains that logistics and the structural condition of a building often drive the product decision. If cladding a tower or high-rise where there’s rigging access on the exterior, it can be faster to clad using a curtainwall system. If cladding a long, low-rise building with a long, horizontal orientation where a crane would have to be brought onsite for the purpose of setting a façade, it might be better to go with a window wall system.