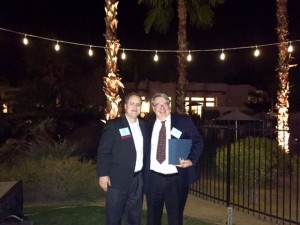 From left to right, Bill Yanek presents the GANA Member of the Year Award to John Dwyer with Syracuse Glass during the Annual Conference Awards Reception in 2016.

Syracuse Glass Company (SGC) president John Dwyer is transitioning his leadership responsibilities to newly hired CEO Joe Gudenburr as part of a designed succession plan. Dwyer will continue to act as SGC’s chairperson of the board and provide ongoing support to the business.

Dwyer joined SGC in 1984 and has served as president since 2005, overseeing a period of transformative growth through an unwavering commitment to product line extensions, product quality and customer service, according to the company. Throughout his career, Dwyer was highly involved with the Glass Association of North America, serving as a board member for many years, GANA president in 2003- 2004, and centric president from 2014-2017. Dwyer was awarded the C. Greg Carney Member of the Year Award in 2016 and IG Division Member of the Year Award in 2014. For years, Dwyer helped to organize the Square Table Meeting.

“I am so proud of what our team has accomplished over the years and very excited about SGC’s future,” says Dwyer. “While this is a bittersweet time for me, the future is very bright for Syracuse Glass Company, and I look forward to participating in the next chapter in the SGC success story in my role as chairman.”

“John Dwyer has been synonymous with Syracuse Glass Company for nearly 40 years,” says a representative for Lineage Capital, SGC’s investment partner. “During John’s tenure as president, SGC experienced extraordinary growth, creating job opportunities in the local community and satisfying glazing customers throughout upstate New York and Eastern Pennsylvania. While John’s day-to-day involvement at SGC will certainly be missed, his presence on the board and the core values that were instilled at SGC throughout his tenure will continue to be key contributors to the company’s success for years to come.”

Gudenburr’s tenure as SGC’s CEO began yesterday. Gudenburr is a highly accomplished business executive with more than 30 years’ experience leading and growing businesses in the sales and marketing, manufacturing, supply chain, service, logistics and distribution arenas, according to the company. He joins Syracuse Glass Company from Sprague Energy, where he was the division general manager for a $150 million delivered fuel business. Prior to Sprague Energy, Gudenburr spent nearly 16 years as the president and chief operating officer of G.A. Braun Inc. Previously, Gudenburr was vice president of sales, marketing and product development for the Buckbee-Mears Group and executive vice president of global operations for Vision-Ease Lens. Gudenburr also served in the U.S. Army to the rank of captain and holds a Bachelor of Science in general engineering from the United States Military Academy at West Point.

“I can think of no one better than Joe to lead SGC at this point in time. Joe’s extensive leadership experience and well-rounded background make him the perfect fit to advance the values, strategic initiatives, and vision that we have for SGC,” says Dwyer. “Joe was an immediate cultural fit from our first meeting, and the team here is eager for Joe to bring to SGC his proven, disciplined approach to sales and operational growth.”

“It is a very exciting time to join SGC and Lineage. I have been favorably impressed with the professionalism of this organization and the tireless work ethic of the team members that make a difference every day for our valued client partners. I look forward to working with each to build upon the exceptional foundation that John has established,” adds Gudenburr.

Additionally, SGC has hired Sherri Doucette to lead the company’s sales and marketing efforts in New England. Doucette has extensive architectural glass and metal experience from her prior roles at Tubelite Inc. and SIGCO, according to the company, and she will be tasked with expanding SGC’s presence in New England.

“We are extremely pleased to have Sherri joining our organization. Her innate technical experience and service-based mindset is a perfect fit here at Syracuse Glass,” says Gudenburr.