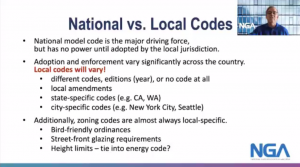 The world of codes and standards is constantly changing. Recent updates show the industry shifting toward increased energy efficiency, on both national and local levels. The session “Glass and Glazing Codes: Deep Dive,” held during the virtual National Glass Association (NGA) Glass Conference today, provided an overview of recent developments.

Nick Resetar, a technical codes consultant with Roetzel & Andress, covered recent developments in bird-friendly glazing. He explained that U.S. House Bill H.R. 919, The Bird-Safe Buildings Act of 2019 was passed by the House within the Moving Forward Act, but died in the Senate. However, he believes it could show up again soon. The bill would only impact federal projects.

“To comply with H.R. 919, 90% of the exposed façade from the ground level to 40 feet must include glass employing ‘elements that preclude bird collisions without completely obscuring vision,’” he said, adding that the U.S. will see more of these requirements in the future.

Resetar also explained that the 2021 IBC update will be underway soon. The association has submitted two public comments related to daylighting in education facilities.

The Energy Act of 2020 was passed alongside the CARES Act last year. It streamlined the available federal energy efficiency programs to retrofit schools; accelerated smart building technology in federal buildings; directed the Secretary of Energy to report to Congress on the benefits of electrochromic glass, and reauthorized the Department of Energy’s solar energy program. In addition, solar projects commenced in 2020, 2021 and 2022 are eligible for a 16% credit. In 2023 and beyond they will only be eligible for a 10% credit.

Resetar next explained the situation with the International Energy Conservation Code (IECC) and Chapter 11 of the International Residential Code (IRC). Online governmental consensus voting led to the overturning of several changes rejected at the public comment hearings. The International Code Council (ICC) certified those votes. This has led to a review of the procedures. Resetar explained that while the changes don’t have much impact on the glass industry, this could set a precedent going forward.

Technical codes consultant Tom Culp with Birch Point Consulting informed attendees that NGA is currently working on the 2022 version of ASHRAE 90.1. The 2019 version was aligned with the 2021 IECC with no reductions in window area. ASHRAE 90.1-2022 will include new onsite renewable energy requirements (i.e. PV and BIPV). This was also proposed to the New York Stretch code. It does include an envelope backstop.

Culp explained that committees are finalizing a second draft of thermal bridging requirements. A new addendum with tighter air leakage requirements and more air leakage testing is likely to be included.

“New proposals for the 2024 IECC will need to be submitted in early 2022 so we need to start thinking about that,” he added.

Culp explained that there’s been a new focus on existing buildings with legislation such as New York City Local Law 97 and Washington State H.B. 1257. These create more incentive to upgrade existing buildings than before, which could include envelope upgrades or secondary glazing.

Culp said that when it comes to the future of codes, he expects two trends: Continued “normal” incremental advancement and aggressive jumps in proactive locations. For the latter, he expects the scope to broaden to areas that were previously considered “beyond code” such as decarbonization/electrification goals and net-zero energy targets.

Codes consultant Thom Zaremba with Roetzel & Andress explained that the changes in the 2018 versus 2021 version of the International Building Code (IBC) regarding glass in handrails and guards (Section 2407) were all editorial rather than substantive. However, he said the question he’s most asked is what it means to achieve a safety factor of four.

“Compliance with this safety factor can be determined by dividing the traditional glass strength values by four. If that gives you a number larger than the linear load of 50 pounds and concentrated load of 200 pounds then you’ll meet the safety factor of four,” he said, adding that this only applies to the glass.

Zaremba then moved on to National Fire Protection Association (NFPA) 80, which has just gone through its second public hearing. He reminded attendees that a label for fire-rated glass is required. He also pointed out that NFPA does not recognize temperature rise doors, which only exist in the IBC.