From Windshields to Decorative: Norman Foxworth Looks Back on 50+ Years

Today’s glass industry isn’t the same as it was in 1968 when Norman Foxworth founded Dependable Glass in Covington, La. “Back then, he says, “we didn’t have the diversity [of products] that we do today.” 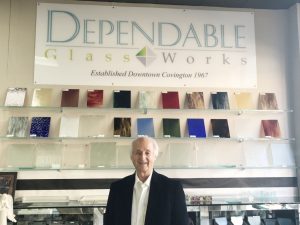 Over the past 50-plus years, Foxworth has built Dependable Glass into to a well-known fabricator that takes on a variety of unique, specialty glazing projects. He’s nearly 80 years old, goes to work every day, is the first one in, the last one out, and he’s not done yet.

“With all the specialty things we do, if we get a call we almost don’t have to say no,” he says. “We are a specialty glass company, and can fabricate almost anything,” he says. “We’re about 30 miles from New Orleans, and have a large inventory, with a lot of diversity …”

Growing up in a small town, Foxworth says there were not a lot of career opportunities in the area.

“Out of high school, I married a lady whose father was in the glass business, and he encouraged me to come work for him,” says Foxworth. He spent a few years learning the glass industry from his father-in-law, as well as from another glass shop owner in nearby St. Tammany Parish, before making the decision to start his own business.

“I was the only employee,” he said. “As I was starting, windshields were a big business for small glass shops. I was fortunate, because I had a friend who asked if he could invest [in the business] with me. He and I became the owners and he gave me a little more insight into how to run a business … [which means] treating yourself like an employee.”

By the 1970s Foxworth says he started to get more involved on the commercial side, while still working in automotive glass.

“Auto glass was very competitive, but it was the primary bread winner for small glass shops,” he says, adding he eventually became more involved with the storefront end of the business. As that part of his business began to grow, Foxworth began traveling to association meetings around the country.

He continues, “In the 1980s, after looking at all the things I’d see at the shows, I started buying fabrication equipment—but I still kept my glazing business.”

After purchasing bevelers and an edging machine, Foxworth began looking for another market to support those lines, which brought him to furniture. He says he had some success producing glass tabletops and other beveled glass products, which he would sell through the furniture markets. However, that segment became increasingly challenging due to growing offshore competition.

“In the mid-1980s I was struggling to find the market where I could sell beveled glass. I found a company that was closing and bought 10,000 framed mirrors and that allowed me to open a retail business selling mirror, tabletops and pedestals, but that decreased because of foreign competition,” he adds. “So I just kept trying new things to make it work. But it’s always been glass. We would venture out to try new things; many things to support the glass, but it didn’t seem to click.”

Foxworth says he would look for little things to do that perhaps others weren’t doing, such as resin cast laminating glass. This eventually brought them into the water jet business for cutting and polishing edges. In 2012 he says they were fabricating insulating glass and by 2018 had added a tempering line as well, which he says has been a good move for them.

After more than 50 years in the glass industry, Foxworth has learned a lot, and says one of the best parts has been the relationships he’s built. Sadly, he says, the industry doesn’t have those same relationships it did in the past.

“We don’t have the support from [suppliers] we used to have. I can’t just pick up the phone and call them. They’re facing the same things we are; their sales people won’t be there long. I don’t know people the way I used to, and I miss being more than just a number.”

However, he’s still excited for the future of his company and the direction it’s going. His daughter, Jill, joined the business in 1985 and helps lead the company today.

“I think our company has tremendous potential. We get calls every day from people looking for product knowledge, and in our team we have people in [many different areas] and all are so knowledgeable,” he says. “If they run into a challenge and are not comfortable, they will come and talk to me and we can find the best route to go. I want to keep that rapport that we don’t know it all and we learn every day … I found out a long time ago there’s still a lot I need to know. I travel and go to little shops and see what they’re doing, and I say ‘why didn’t I do that?’”

He continues, “But I do know what I’m doing is working and if others are willing to put the time in it will work for them. Listen to your customers. I don’t have all the answers; each day I readjust my thinking. I’m 80 years old, and the Lord has given me strength and I want to be in a position to step back more and I think the future of the company is good.”

3 Responses to From Windshields to Decorative: Norman Foxworth Looks Back on 50+ Years