Mock-up testing serves a distinct and important purpose: validating that the glazing systems will perform the way they’re designed. Not all mock-ups are the same, however. They can serve different purposes, with some taking place in a lab and others in the field; some for performance and some for aesthetics.

“There’s lab testing and mock-up testing and then there’s field testing,” says Mark Baker, president of IBA Consultants Inc. in Miami. “People often think they’re the same, but it’s important to highlight the fact that mock-up testing in the lab is to validate the design of the glazing or cladding system. You’re establishing that the designed-as-intended system is capable of meeting certain perform levels—air, water, structural—and that can get deeper and deeper.”

“The distinction between the two is field testing validates only the workmanship while the lab validates the design,” says Baker. “Some people think they don’t need one if they’re doing the other, but these tests have two very distinct and important roles.” 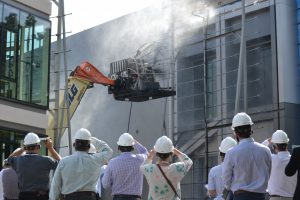 John Runkle, vice president of building science solutions/building and construction, with Intertek, adds, “From a quality assurance perspective, it’s hard to point to another step that’s more important than a tested mock-up. There are other import steps, but a tested mock-up is the first time to really evaluate the true performance of a project that’s specified, designed and installed by the actual technicians working on the project, using the material specified to the job.”

He continues, “A performance mock-up should simulate the actual as-built building as much as possible; you don’t want to introduce conditions that don’t exist in real life … You also want to try and include as many systems as you can. Roof, foundation, façade, etc. … because you want to have as many of those interfaces on the mock-up.”

While some types of testing can occur during construction, performance mock-ups are done before that begin, and, in most cases, are included in the project spec.

“Sometimes the owner will require it, especially on high-end healthcare, institutional or university projects,” says Tony Cinnamon, associate principal at Wiss, Janey, Elstner in Chicago. “Architects will often define in the spec what test procedures [they want] for that mock-up. Air, water, structural—those are baseline, but then you can get into vertical and horizontal movement, thermal testing, dynamic water testing, etc., and all of that is typically in the spec.”

Runkle adds that lab mock-ups are the only option for testing interstory drift, movement and some more complicated and structural walls.

In addition to performance testing, some projects also call for a visual mock-up. According to Cinnamon, a mock-up that’s for visual purposes only is infrequent. In some cases the performance mock-up can serve both purposes.

“There are a few cases in larger projects where there will be a separate visual mock-up, and a lot of times that’s for the glass,” says Cinnamon. “Color-wise, you can see if there are any issues and how it will look together. These are done early on in the project.” He says the visual mock-up can also establish glass flatness, such as roller-wave distortion, anisotropy, etc.

Performance mock-up testing is an essential step to ensuring the building will perform as it’s intended, and can help save both time and money.

The information is excerpted from the article titled, “Making the Grade: Mock-Up Testing Helps Ensure a Quality Project.” To read the full article in the February 2021 issue of USGlass magazine, click here. To sign up to receive USGlass magazine free of charge, click here.