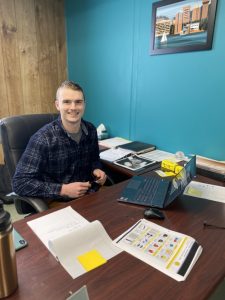 Editor’s note: At the time this story was published, USGlass was unaware of the legal allegations concerning Brad Aldrich. Read more.

“Hunter has been a great student of the position in working with Jeff, who was the perfect mentor for all of the interns that have been with us,” says OcuGlass CEO Brad Aldrich.

Richards will join the company’s leadership team alongside chairperson Steve Williams, Aldrich and plant manager Brant Ryynanen, who was also promoted from production manager this month after five years with the company.

“Hunter’s work ethic, high level of character, and his ability to think mechanically and creatively are key assets to this position. The transition is happening quickly, but his knowledge of the company and our team atmosphere will make the transition seamless. We are a tight-knit group, and he fits in with all aspects of our operation,” says Aldrich.

In his new role, Richards will oversee engineering and maintenance of the facility and all production lines and processes. He will work directly with Ryynanen to improve and build upon the efficiencies and growth that OcuGlass has seen in the last few years, according to the company. In Ryynanen’s expanded role, he will continue to manage all aspects of production and will add management of the facility and expansion operations.