South Fort Myers High School, in Lee County, Fla., is putting its own spin on ABC’s hit show Shark Tank. The school’s production of “Wolf Den” is based on its mascot, the wolfpack.Bill Daubmann, president of My Shower Door and D3 Glass, is one of six business owners who will hear pitches from the students about their own business ventures and possibly invest to make their ideas a reality. 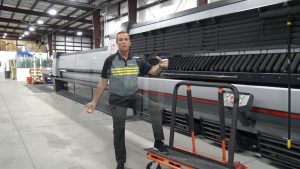 In addition to Daubmann, the judges include a microbrewery owner, financial expert, car dealership owner and an app developer.

Daubmann will be the Wolf Den’s “Mr. Wonderful,” sitting in the center of the other investors, as does Shark Tank’s own Mr. Wonderful, Kevin O’Leary.

The judges heard from five students of the Fort Myers school on April 29, with an opportunity to invest in any presentation. Daubmann says the intention is to make it as similar to the actual show as possible, with lawyers assisting with the legalities if such partnerships were to develop.

The entire show will be posted to the Lee County School Department’s website, with a half-hour segment intended to broadcast on the local NBC affiliate station, NBC2, according to Daubmann.

He says the primary interest in the Den is to mentor students and to offer them guidance. He also says there is plenty of enthusiasm around the production and anticipates it being an annual occurrence.

“It’s going to be part of the teacher’s curriculum to have it every year, and we’re going to want to grow it. Some more students want to get involved in it, now that they see how it went.”

The possibility of this class becoming a reality is due to the state grant “Jobs for Florida Graduates,” a program organized by the state funded to pay for the teacher to have these business classes, according to Daubmann.

Every student who participated in Wolf Den will remain in contact with each of the “wolves,” not just those who received an investment offer. If the judges know of another contact or business owner who would align with the idea or vision, they will help create that relationship and allow for more mentors to offer help, he said.

The D3 Glass owner recognizes that going straight to university from high school is not everyone’s path, but everyone should have a chance to reach their potential, regardless of the steps they take.

This mentality has allowed him to do more than just participate in the Wolf Den production. Daubmann is spearheading an Inaugural “Workforce Signing Day.”

In the world of high school and college athletics, there is a ceremony where graduating student-athletes sign a binding letter of intent, committing  to continuing their career at the university of their choosing. The students are greeted by university representatives and usually are gifted with gear to represent their future school.

This is the model for what Daubmann wants to do for the inaugural “Workforce Signing Day.” The event is scheduled to be held at 6:30 p.m. on Thursday, May 13, 2021, at the My Shower Door / D3 Glass headquarters in Fort Myers.

At this live and in-person event, graduating students who will be immediately entering the workforce will be celebrated alongside their future employers and will participate in a ceremonial “signing,” where both parties will be recognized and honored, according to Daubmann.

“We want to help them be entrepreneurs and be into business for themselves,” he said.

As a central figure in both of these events, Daubmann exemplifies how the glass industry can contribute to helping the next generation workforce.