A year into a pandemic that shifted life from being “anywhere but home” to “nowhere but home,” it’s hard to remember just how active and loud society was. The world for the past year has been quiet, but life is just starting to pick up where it left off. The once constant noises of cars, planes, trains, motorcyclists, party music and social gatherings are slowly returning, but innovations in glazing are helping to keep them out of indoor spaces. 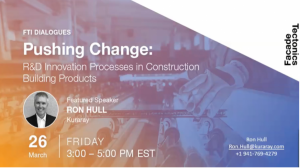 (FTI) recent dialogue series, which took place virtually on Friday, March 26, offered a look at several of these façade innovations, including acoustics. The virtual event, moderated by Mic Patterson, ambassador of innovation and collaboration for FTI, focused primarily on the innovation of materials, products, and processes from industry suppliers, manufacturers, fabricators and contractors.

Ron Hull, marketing manager for Kuraray, spoke during the session, offering a look at the company’s innovations in glass and glazing.

“When it comes to laminated glass, we’re really all about safety,” said Hull. “When the glass breaks, we want people to be safe, we want the glass to stay in the frame during a hurricane, so safety is our main goal.”

Hull explained that the glass industry has undergone significant renovations – beginning with the Romans in 100 A.D., who were likely the first to produce glass and use it for windows, and more recently, the development of acoustic PVB, which has been used in automobiles since 2007.

Acoustic performance is one area that Hull said is starting to get a lot of attention. He said when comparing the difference between 8-mm float glass to PVB, “By itself, you get an STC (sound transmission class) of 32 (db). If you cut the glass in half into 4:4, add PVB, you jump up to 34 (db). If you remove the PVB and put in acoustic PVB, you get up to 37 (db). So, you can actually get a five-decibel jump in STC just going from glass to acoustic PVB.”

An innovation that Kuraray plans to launch later in 2021 is the SentryGlas Acoustic Interlayer. Hull said that given the popularity of structural glass for applications such as stairs, floors and facades, his company developed this new Interlayer with an ionomer outer layer, which can withstand hurricanes, on either side of a Thermoplastic elastomer (TPE). The center layer is what provides for improved acoustics.

In addition to the glass innovation, Kuraray has also developed a tool to measure acoustics, the Trosifol SoundLab AI. It is an estimating tool based on artificial intelligence that measures acoustics and can predict glass construction’s sound control performance. A report is produced that displays a diagram with Weighted Sound Reduction Index, Outdoor/Indoor Transmission Class and STC values, Hull explained.

Hull added Kuraray has projects that have recently implemented acoustic PVB include buildings in noisy cities, such as New York and Chicago. He said that structures like the New York Pierhouse and the Huxton Hotel by the L-train in Chicago use this type of glass to minimize the cities’ noise and allow visitors to escape the chaos and hustle of the metropolitan areas.

The latest FTI session included several other sessions focusing on various façade technologies and innovations. Stay tuned to USGNN™ for additional news and updates on those sessions.