The Dodge Momentum Index posted an 8.6% gain in April, climbing to 162.4 (2000=100) from the revised reading of 149.5 in March. The Momentum Index, issued by Dodge Data & Analytics, is a monthly measure of the first (or initial) report for nonresidential building projects in planning, leading to construction spending for nonresidential buildings by a full year. April’s gain marks the fifth consecutive monthly increase. Similar to February and March, it was due to a large increase in institutional buildings entering the planning stage while commercial planning eased by less than 1%.

Since hitting its nine-year low in January, institutional planning has rebounded substantially, climbing 77% over the last three months. Healthcare and laboratory projects continue to dominate the sector, pushing institutional planning 50% higher on a year-over-year basis. Conversely, the commercial component has slipped in recent months as fewer warehouse projects have entered planning, though the sector is 21% higher than in April 2020. Overall, the Momentum Index is 31% higher than last April, which was the first entire month of COVID-19 shutdowns. 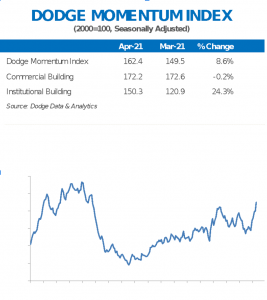 April’s data highlights the nascent recovery underway in institutional building. However, given the average length of time between planning and project start, this rise will likely not impact construction starts until late 2021 or early 2022.