Never mind the Ferraris, Bugattis, Lamborghinis and McLarens located throughout this luxury car dealership. Six men carrying a lite of glass weighing about 300 pounds are making their way through. Kevin Flick, branch manager of Binswanger Glass in Pineville, N.C., says the company’s recent installation at a McLaren dealership in Charlotte, N.C., was a lot like playing the old children’s game of Operation—one that required careful, steady hands. 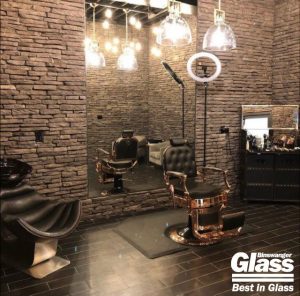 He adds,”We’re all wearing hard hats, steel toes, cut-resistant jackets… level-seven jackets, level-seven gloves … I mean, we were all dressed up like we’re going to battle, so that makes it even that much more difficult.”

The single lite of mirror, 6 feet by 10 feet, was carefully brought into a small room in the McLaren dealership.The room, which was once a windowless vault, was transformed into an employee-only barbershop.

Binswanger Glass of Pineville, N.C., fabricated and installed the mirror, but it wasn’t an easy task.

“We’ve done other mirror jobs, but nothing like this one,” says Flick.

Part of the difficulty was maneuvering the piece through the building. The structure is filled with millions of dollars worth of inventory, including a 1955 Mercedes listed on the site with a $1,999,996 price tag.

“We [had] to go through a door opening that’s not very much larger than that glass,” Flick said. “The floors are concrete, the walls are brick, and the doors are steel. So everything that mirror will touch, if it touches it, will break that mirror.”

The team had to navigate the 1/4-inch thick glass through a hallway with tight corners, without the assistant of a dolly — that would have taken up valuable room; when even a few inches were crucial. If the glass were to bend, the entire piece would have broken. Plywood was placed on the floor, and caution was taken at every step. And, just like the game of Operation, every move required delicate, precise coordination.

Flick says that whenever he encounters a new hire, he stresses that the process, material and safety protocols that need to be respected on jobs such as this.

In the end, Flick describes it as a “pretty amazing project.”