Architecture and Glazing Go for the Gold in Tokyo

July 23 is the day the world has been anticipating for more than a year—the Opening Ceremonies of the 2020 Summer Olympic Games in Tokyo. The Opening Ceremony is the start of the highly anticipated tradition, as nations across the globe come together and enjoy the success of their top athletes. And with the games, comes a range of new architectural projects. This makes for an exciting time for many in the glass and glazing industry, who may be interested in seeing such projects showcased on the world stage. 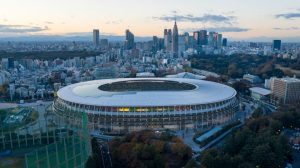 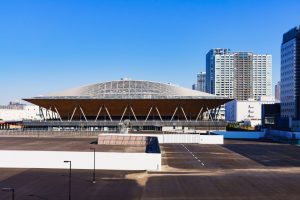 A number of structures were built for the Tokyo Olympics. The events will take place in a total of 43 venues – including eight new permanent structures, 25 existing venues and 10 temporary sites. Silicone and sealant provider Dow serviced several venues for the Games, including the Olympic Stadium, Ariake Arena, Tokyo Aquatics Centre and the Ariake Gymnastics Centre. The Ariake Gymnastics Centre, which incorporates multiple Dow technologies, will be home to gymnastics, rhythmic gymnastics and trampoline competitions. 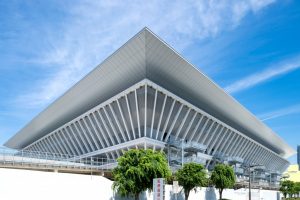 Japanese architect Kengo Kuma was selected to design the Olympic Stadium. Designed with the intent to make the venue entirely powered by renewable energy and as sustainable as possible, it has been reported that the roof’s glass-like solar panels will fuel electricity, and rainwater will be collected in underground tanks and irrigate the turf on the stadium’s playing fields. 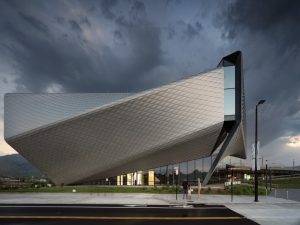 The 1964 Olympics Yoyogi National Gymnasium and 2020 Olympics Tokyo Aquatics Centre are two Tokyo Olympic swimming venues designed by father, Kenzo Tange, and son, Paul Noritaka Tange, respectively. The Yoyogi National Gymnasium’s roof was designed with a cable structure — suspending the roof by tension to achieve a large space. This system was typically used for bridges, but no one had ever attempted to use a suspension structure over such a large space in a building, according to the architectural firm. The gymnasium was recently designated to be registered as an Important Cultural Property and will hold the Tokyo 2020 Olympic Handball and Paralympic Badminton and Rugby Games.

In addition to the new structures in Tokyo, other related construction was recently completed in the U.S. A $91 million, 60,000 square foot U.S. Olympic & Paralympic Museum opened last year in Colorado to celebrate the journey and achievements of the athletes who represent the country. Designed by New York firm Diller Scofidio + Renfro, the façade’s exterior cladding consists of 9,000 panels of reflective, anodized aluminum. Each sheet is angled slightly above the one next to it, which shadows and reflects in accordance to daylight. Façade suppliers were MG McGrath, Alucoil, Oldcastle BuildingEnvelope® and Viracon. MG McGrath Architectural Glass & Glazing provided and installed over 11,000 square feet of Oldcastle Resliance Cassette curtainwall framing with Viracon VE1-85 insulating glass and spandrel.