A New Take on Solar Panels Puts MSU in the Clear

Posted on September 8, 2021 by Luly Hernandez

What may appear to be just another window renovation on a 166-year-old university campus is actually a footnote for the glass and glazing industry. The Biomedical and Physical Sciences Building at Michigan State University (MSU) is now home to transparent solar glass panels from Ubiquitous Energy’s (UE) Californian facility. 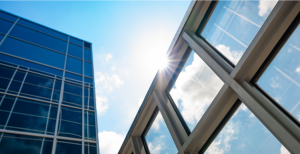 According to the university, the 100 square feet of transparent solar glass installed above the building’s entryway will generate enough electricity to power lighting in its atrium. The solar-harvesting system converts sunlight into electricity, like ordinary solar panels. These transparent panels, however, let visible light pass through while picking up just the invisible wavelengths of sunlight in the ultraviolet and the near-infrared to convert into electricity. Once installed, the panels are visibly indistinguishable from traditional windows.

Veeral Hardev, vice president of strategy at UE says that the glazing used is a “standard dual-pane insulating glass unit (IGU)… The outer [lite] of glass has a transparent solar coating, UE Power, (on surface 2) that serves as a low-E coating as well as a renewable energy generator. The actual glass is a standard float glass.”

Each of the installed IGUs is approximately 14 inches by 20 inches in size and was developed and manufactured by UE and Richard Lunt, the Johansen Crosby Endowed Professor of Chemical Engineering and Materials Science in the MSU College of Engineering and a co-founder of UE.

“The key technology is the transparent solar coating, UE Power, which is an invisible, thin solar coating that is deposited directly onto the glass surface using standard physical vapor deposition (PVD), the same way traditional low-E glass is made,” says Hardev. “The transparent solar coated glass is then fabricated into a dual-pane IGU using the traditional IGU manufacturing process with the lone exception that the generated renewable energy is transferred from the glass via electrical wires.”

This was the first installation of UE Power windows at a university. Along with the other installations of UE Power windows, this shows the visual appeal of the company’s transparent solar technology and real-world application of using renewable energy generated on-site without aesthetic or space tradeoffs, according to Hardev.

This isn’t the first time UE has been mentioned in the same sentence as solar glass – let alone transparent solar glass. During a WDMA conference in June, Miles Barr, co-founder and chief technology officer of UE, mentioned the company’s desire to reinvent the solar panel into “simply, a see-through version of a solar panel that generates electricity from sunlight.”