Posted on September 16, 2021 by Rebecca Barnabi 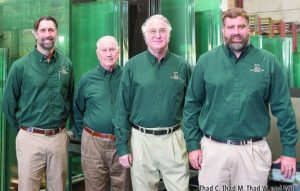 Thad M Ziegler (second from left) passed away recently. He is survived by (from left to right) grandson Thad C Ziegler, son Thad W Ziegler, and grandson Will Ziegler.

The company began as Ziegler & Ziegler, specializing in paint, wallpaper and plate glass. Thad M. Ziegler took ownership in 1968 after the passing of his father, Thad C. Ziegler. The company was incorporated in 1969 as Thad Ziegler Glass Inc.

Jerry Anderson, retired president of Apogee, and his wife, Cathie, met Thad M. Ziegler and his wife, Patsy, at a Flat Glass Marketing Association (FGMA) national convention in Scottsdale, Ariz., in 1974. “We hit it off immediately as couples mainly through our passion for tennis, but Thad and I through a respected business relationship,” Anderson says. Patsy died in June 2016. Thad M. served as president of FGMA from 1983-1984.

Thad M. Ziegler, according to Anderson, “was extremely proud of Ziegler Glass being the oldest family-owned glass business in the USA.”

“It takes a great deal of business leadership to keep a full service, family-owned glass company profitable and continuing for over 100 years in this environment of specialization in glass companies concentrating on one segment of the business,” Anderson says.