Atlanta’s 2021 rendition of GlassBuild offered glass and glazing companies the opportunity to display determination and build on momentum. As day three wraps up, exhibitors reflect on the pandemic’s impact 18 months after its North American arrival. 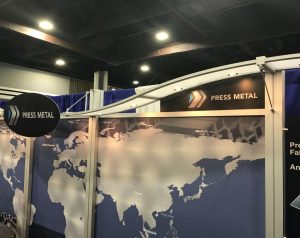 “[COVID-19] affected our teams in Malaysia quite a bit,” says Joel Burlingame, vice president of sales and marketing at Press Metal North America. “Our factories were forced to shut down because of how Malaysia was handling it.”

Though GBA is back after last year’s sudden cancellation, there remains hesitancy and concern over the ongoing pandemic and recent coronavirus variant outbreaks. Some companies that would have brought machinery and large equipment under normal circumstances felt the best choice was to leave it all behind and focus on attendee and customer interactions.

Bavelloni is one of those companies. Walter Schlup and Max Williams, senior vice president and vice president of sales, respectively, said that the decision not to bring machinery was based on the current circumstances and that things could change at a moment’s notice.

“This is the first time in years we haven’t had a machine on display,” they said.

The personal interaction on the show floor appears to be the most motivating factor for many companies, Bavelloni included.

Schlup concurred. “Whoever intends to [arrive to GBA 2021] is serious and came with a purpose.”

Machines and Wheels was also in attendance at GBA, also without machinery.

Southern Aluminum Finishing Company (SAF) is one of the few companies to say GBA is hosted in its home state.

“I think it’s been pretty good so far, I think people were anxious to get out of their home offices, anxious to get away, you know, away from behind their desks. I think… the southeast has been so busy, there’s been so much more business down here… there’s been a lot of pent-up demand,” said John McClatchey, vice president of sales and marketing.

SAF also announced this week the opening of a new facility in Texas.

“Our customers down in Texas kept asking us if we had anyone closer than our Georgia or Indiana or California facilities. Our reps have been begging us to come down to open up a branch; they’ve seen us be successful opening up our other branches. And so they’re really itching for us to do this,” he said. 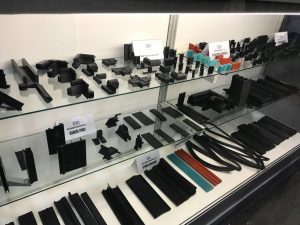 Dubai’s Gulf Rubber Industries showcased its extensive selection of profiles, mouldings and frames. The Middle Eastern company shared its past and present experiences with the pandemic.

“[During] COVID, we didn’t find [many] challenges,” says managing director Urfi Kidwai. “After COVID, we faced a lot of challenges. Transportation [obstacles] have increased drastically—[by] four or five times. Now, we are facing material shortages also. We try to plan in advance so, at the last moment, we will not face the problem of the raw material.” 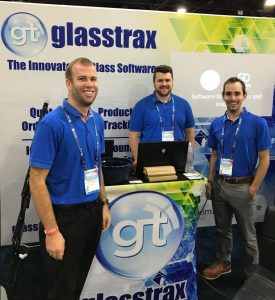 “Primarily, in the past, we focused on glass fabricators,” says sales manager Tyson Oldroyd. “This year, we have released a new program called Glaziers Online, an online software designed specifically for the glazing industry. It’s nice to have an accessible, affordable, unique and customizable [solution].”

GlassTrax developed the program after hearing business needs from glaziers at previous GBA shows. The company has grown by 15-17% each of the last three years. 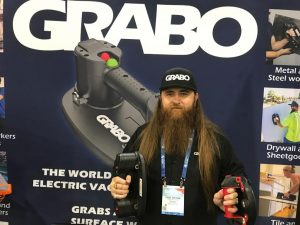 “It has an auto shut-off and an auto start, so, if you lose any suction, you’re going to kick right back on so you don’t lose any material,” says social media manager and marketing associate Dane Patton. “. . . There were many awkward situations in the trades. This tool alleviates a lot of those awkward situations and voids that weren’t being filled.”

Jordon Glass Machinery had three notable machines in its display. One of the largest polishes the glass from its raw state and gives the unit a clean edge. Another was a glass wrapping machine, which can wrap a unit of glass in a film for protection during transport from the factory to its ultimate destination.

“This is the machine that applied the film on both surfaces of the glass, top and bottom,” said Rick Dominguez, president of Jordon Glass. This is so it is protected from the time it leaves the factory to the time it arrives to the installation site, he said.

In addition to glass wrapping the company also had a water-filtration machine onsite called FiltraGlass, which allows for continuous water circulation and simplified disposal of residual waste.

“From an environmental standpoint, it gets a thumbs-up,” said Dominguez.

Eastman Machine Company was also present at GBA – its first time appearing at the show.

“We have been pleasantly surprised by the traffic,” said Amy Denning, vice president of North American sales. “The glass industry is booming which is creating a lot of interest in our systems. We have equipment configured to cut interlayer materials such as PVB, SentryGlas and EVA. Our systems reduce material waste and labor associated with manual cutting. With the labor challenges our country is facing, companies are looking to automation as a solution.”

GBA concludes today in Atlanta. Stay tuned to usglassmag.com for more news and updates from the show.

Luly Hernandez contributed to this report.