It’s been a busy year for Kensington Glass Arts Inc. (KGA), and the company has no plans to slow down.

The Mid-Atlantic glass supplier, commercial glazier and distributor of architectural glass is in growth mode. It opened its fifth location, a distribution center and field office in Richmond, Va., about 130 miles away from its headquarters in Ijamsville, Md. Vice president of business development Bill Wilson says the primary facility in Ijamsville is also expanding by 23,000 square feet of production capacity during 2022—nearly doubling its current size. 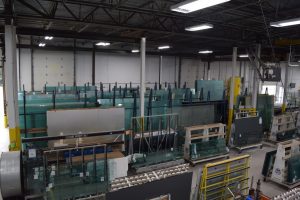 A view of the lites of glass in KGA’s Ijamsville, Md., headquarters.

The company has five locations across Maryland and Virginia. In addition to its headquarters in Ijamsville and the newest facility in Richmond, the others are in Frederick, Md., Baltimore and Sterling, Va. 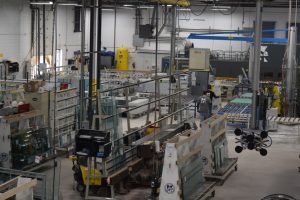 Half of KGA’s production facility in Ijamsville. Shown are polishers (top and bottom left) and CNC machines (right)

From one end of the production floor to the other, KGA emphasizes efficiency in its operations. There are machines to polish, shape, temper, transport and wrap glass, as well as equipment that glides overhead to carry the heavy lites from one station to another. This allows one person to easily handle the workload, which would have once required five. The machine helps a worker lift-and-turn a lite of glass 90 degrees to carefully situate it on a straight-line polisher to be cut and cleaned before being tempered.

While this machine streamlines this process for irregular-shaped lites of glass, just a few steps away is another that can polish glass of the same size and work on two sides simultaneously.

A breakout table on one end of the floor quickly cuts a 1,000-pound piece of glass into smaller pieces that match a customer’s order. The other end holds a Glaston tempering oven that Wilson says conserves energy better than the previous oven that was in its place. The machine shares a spot with an optical scanner that checks each lite of glass to identify any flaws so adjustments can be made sooner rather than later. Two vertical CNC milling machines and a horizontal CNC milling machine help workers cut production time by more than half.

“It used to take us about 45 minutes to take a single lite of glass, lay it on a table, and mark where all the holes and notches [needed] to be done.” says Wilson. The fabrication quality was only as good as its operator in the past, and sometimes, inconsistencies happen, Wilson explains. “We’d have 20 doors that were all identical and one that was wrong,” he says. “With [the CNC machines], if the first one’s right, they’re all right. It also took that production time from 45 minutes a door down to about 12 to 14 minutes.”

The manufacturing plant processes about 160,000 to 200,000 pounds of glass every week, Wilson says. About 200 pieces of glass leave the company’s headquarters every day. 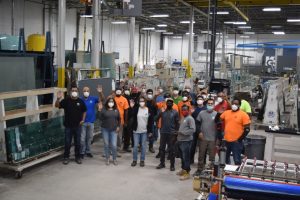 Some of the team members at KGA headquarters in Ijamsville, Md.

Most of the orders are delivered by KGA trucks going to projects outside the metro Washington, D.C. area, such as Boise, Denver, Charlotte or even Miami. Regardless of the destination, he says those projects can possibly lead to new KGa branches.

“We think we have a model that we can replicate over a wider and wider geography, so we’re not slowing down,” Wilson says.