Should I run, hide or fight? The Sentinel Security Group’s founders, Donny Hawkins and Mike Britt, provided answers during their one-hour session at the Fenestration and Glazing Industry Alliance’s (FGIA) Hybrid Fall Conference. 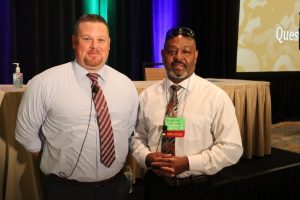 Britt (left) and Hawkins (right) have decades of security experience.

Hawkins has more than 28 years of law enforcement, physical security, anti-terrorism and investigations experience. He previously served as a police officer, SWAT team member and is an instructor in firearms training and defensive tactics. Britt’s resume includes 24 years of anti-terrorism, physical security and high-value asset protection experience. He was the inspector general command investigator for the Department of the Navy and is a Certified Level II Instructor through the U.S. Army. Hawkins explained that while the standard protocol in an active shooter situation is “run, hide, fight,” this plan has flaws.

“Humans confronted with sudden violence either run, fight or freeze,” Hawkins said. “It lacks the flexibility necessary to ‘allow’ victims to use violence as a first response. Think of it like run or hide or fight.”

“An active shooter is someone with a weapon, not necessarily a gun, attempting to harm others,” Britt said. “While mostly men, there is no single profile for an active shooter or single warning sign, making incidents hard to predict. Many use handguns which are easy to conceal.”
Run

Britt shared some suggestions for the first option in an active shooter plan: “Run.”

“Have an escape route and plan in mind,” Britt said. “Leave personal belongings behind. Help others escape, if possible. Prevent others from entering after you leave the facility. Have hands visible in the air with fingers spread, and follow instructions given by police.”
Hawkins said that while some of these tips may seem like common sense, “I am telling you there is no such thing as common sense in a deadly force environment. Escaping danger is one of the most primal actions of the human brain.”

If running isn’t a viable option, hiding is the next best bet.

Knowledge of barricade techniques is crucial when hiding from an active shooter.

“Even a belt or shoelace can be used to barricade a door by tying off a door handle,” Britt said. “Slight resistance can deter an active shooter who is trying to harm as many people as possible in the shortest amount of time. While barricaded, prepare to fight in case your position is compromised.” 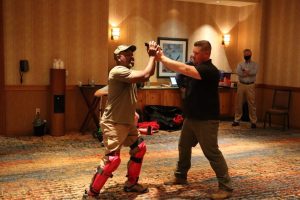 “When your life is in imminent danger, attempt to disrupt or incapacitate the shooter by acting aggressively, using improvised weapons,” Hawkins said. “Go for the neck.”

Hawkins said fire extinguishers can be sprayed in an active shooter’s face, but it may be wiser to hit them with it. A sprayed fire extinguisher can impact a shooter’s vision and senses, but it can impact the person deploying it as well. He also emphasized that “you fight when you absolutely have to. Do not bring the fight to the shooter.”

Preparing Ahead of Time 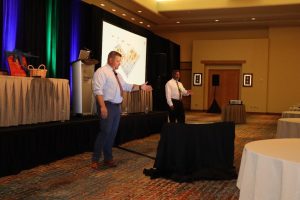 Hawkins provided a first-hand example of mental visualization and how it spared his life during his time in the police force.

“A long time ago, I’m in a police shooting,” Hawkins said. “You hear me come on the radio and say, ‘Shots fired, shots fired. I shot suspect two times—roll EMS, I got a crowd.’ But I have no memory of ever saying it. The only reason I know I did is because I heard the 911 tape and [I] taught at the police academy so I heard it so many times.”

The scene had caused a riot and Hawkins’ nearest backup was seven minutes away at 140 mph. But his training guided him through the chaos that threatened to engulf him.

“What is the difference with you guys sitting in this seat right now?” Hawkins said. “Why would you wait ‘til there’s an active shooter event to figure out what you can do?”
Some additional tips the pair offered included:
• Don’t leave security doors propped open;
• Maintain an effective exterior perimeter;
• Provide facility lighting;
• Employ an electronic security system;
• Strictly control visitor access at facilities;
• Utilize camera systems, for evidentiary purposes and to deter crime; and
• Understand your vulnerabilities and how to correct them.
“Building an active threat response program includes developing a plan and validating it,” Britt said. “Train your workforce—if you don’t use it, you lose it.”

The FGIA Fall Conference concluded yesterday. Look to USGNN™ to read more coverage from the event.