The Show Must Go On: Vitrum Returns to the Stage in Milan

The world may be eager to return to life before the pandemic, but, based on some recent trade shows, the world—at least in the glass industry—isn’t there just yet. That was true for Vitrum, which took place in Milan, October 5-8. According to some accounts, the show’s traffic was slow most days, with few visitors from North America.

Michael Spellman, president of IGE Glass technologies/VIG Technologies was there with the machinery companies he represents. He said while the show was slow most days, “It still remains great for us to be with our manufacturers. We only saw one American and he is a great customer of many of our products. We also met some very interesting new manufacturers … We found it a success for us regardless [and] we so enjoyed seeing our European partners and manufacturers. We also met some new people who we believe have something that will be great for IGE and our industry.”

According to Mauro Bedocchi, sales manager with Denver, which is represented in the U.S. by the Salem Fabrication Technologies Group, attendance for the first day was moderately slow, and while they did have a small steady stream of visitors to the booth the first day, numbers were much lower than previous years. However, those who did visit the booth were quite interested and serious customers. 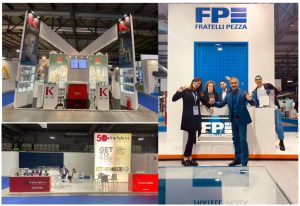 Several companies represented by Salem Fabrication Technologies, including KDrills Glass, Fratelli Pezza and Belfortglass, featured some of their new products and developments during Vitrum.

Others agreed that the show was slow. Jacopo Baldi, sales manager for Kdrills, also represented by Salem Fabrication Technologies Group, said the show was very small and he didn’t see many U.S. companies.

“We have seen people from Canada, Mexico, California, Louisiana, Ohio, Illinois, and Indiana in our booth. This has been nice to see as it reinforces the theory that the world is returning to the life that we are used to,” said Cullum, adding he was grateful for this.

Cullum said his company debuted its newest vertical CNC work-center the Ypsos, which he said is the first vertical CNC machine that can grind and polish glass using two heads at the same time. “We are extremely proud of this project and have been anticipating the launch of this machine for quite some time now. For this project we have had the luxury [due to the global pandemic] of being able to do extensive and rigorous testing of this machine for 16 months,” he said. “Everybody at CMS has been patiently waiting for the launch of this product and now it is finally here.” He said they have sold the first two Ypsos machines and have extended offers for a few more to customers. “I suppose that this is the silver lining in what has been an unprecedented time in our recent history. We have had time to develop new products and innovations to better serve the market.”

He added that in recent years CMS has been pushing automation and integration heavily. “Now with the labor shortage we are all experiencing this has been the topic of discussion for most of the business owners and executives that we have had conversations with. I expect that this trend will continue.” 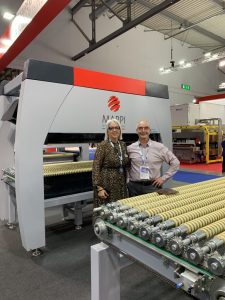 Louis Moreau with AGNORA (right) was one of the few North Americans who traveled to Vitrum. He visited with Nancy Mammaro from Mappi to learn about their new tempering furnace.

Louis Moreau, head of technology and innovation with AGNORA in Ontario, Canada, was one North American who made the trip. One of the trends he noticed was the need for glass handling machines or multifunction machines due to the labor shortage. He said the Forvet glass automatic storage, retrieval and tempering line loader and the Denver vertical machining center were such examples. Products for laminated glass production were also a focus.

Some of the other new products he saw included Mappi’s new furnace that can produce high compression strength for fire-resistant glazing; the Sparklike online scanner that measures the argon level and gap width directly on the insulating glass line in double and triple glazed units; and the Intermac revised CAM software.

The next staging of Vitrum is planned for 2023. Dates and more information will be announced as they are made available.

1 Response to The Show Must Go On: Vitrum Returns to the Stage in Milan