The Window and Door Manufacturers Association (WDMA) kicked off its virtual Executive Conference last week—a series of four sessions held each Thursday over the next few weeks, discussing various issues, such as Understanding the Impact of Climate Change. 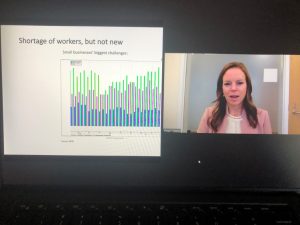 “We hit a lull that we have not recovered from where it is hard to get that last 20% back to the workforce,” said Greene.

That was the topic presented last week by Megan Greene, global chief economist and senior fellow at Harvard Kennedy School. Before digging into climate topics, Greene gave a brief economic update, which offered some good and bad news.

“The good news is that the Delta variant is receding but so is economic growth,” she said. “Part of this is due to Delta, but also due to supply chain disruptions.”

She shared some interesting data from the restaurant-booking website OpenTable, showing that restaurant bookings have tapered off, which is also true when looking at mobility data.

“Mobility data has also tapered off and flattened out in the U.S.,” she said.

Her comments regarding labor numbers are in line with what glazing industry companies are seeing firsthand. “We hit a lull that we have not recovered from where it is hard to get that last 20% back to the workforce,” said Greene.

Greene predicts, “Peak growth is probably behind us.” And while many economists are in angst over inflation, Greene isn’t as concerned on that front as “productivity growth will take some of the steam out of it.”

However, what continues to increase is the nation’s energy consumption, which Greene said will continue to be above average. “U.S. federal emissions are still the size of a small country, so there is a lot of progress to be made,” she said.

Greene ticked off some of the items President Biden has achieved on the climate front, including rejoining the Paris Agreement and reversing a number of climate-related actions revoked by President Trump.

“Every agency now has someone there who is very focused on climate issues,” said Green. “The Administration is trying to set a standard to be maintained [in future Administrations].”

Goals include reaching net-zero by 2050, reducing greenhouse emissions by 2030, and creating a carbon-free power sector by 2035. “These are very ambitious goals that no country is on track to meet at the moment,” Green said. “China is the biggest polluter, but the U.S. is second, and per capita, we are worse.”

Greene pointed out that Biden’s American Jobs Plan has a significant focus on climate-related spending. However, “Congress isn’t really cooperating, and it comes down to a razor-thin majority in the Senate,” said Greene.

USGNN™ will continue to report on the Executive Conference. Check back to usglassmag.com for further updates.

This entry was posted in News, Today's News and tagged Window and Door Manufacturers Association (WDMA). Bookmark the permalink.