Attila Arian, president of Schuco USA, served as host yesterday during Zak World of Facades, which returned to New York with a day-long event covering a diverse program for the architectural façade industry. In introducing presenter Joshua Ramus, founding principal with Rex Architects, Arian described his work as “the intersection of where creativity, architecture, and courage meet.” Ramus led a discussion called “Critical Naiveté,” which explored his firm’s work on two unique façade projects. 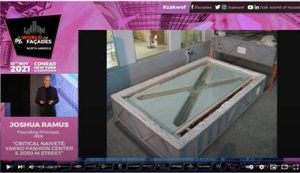 Ramus began by explaining that for his firm, critical naiveté describes turning back to first principles and exploring them with a child’s mind.

“Children are naïve, but that doesn’t mean they lack any criticality, which leads them to see and advance ideas that sometimes shock us …” he said.

With this in mind, Ramus offered a look at two highly glazed facades, one in Turkey and one in Washington, D.C. On both, the firm worked in close collaboration with façade consultant Front Inc.

The first project he discussed was the Vakko Fashion Center, located in Istanbul. Ramus said they were approached by the company’s CEO to take the bones of a hotel never completed 25 years before and convert it into the headquarters. In beginning the project, Ramus said they were able to draw from work his firm had previously done for Cal-Tech, that was shelved after a leadership change. When looking at the structures, he said, it became apparent that the dimensions were the same.

The Vakko project consisted of a lightweight steel structure that moved independently of a much heavier concrete object, and they needed to clad it. The design time was also working with a client that wanted to have his brand imprinted on the façade of the building, which is something, Ramus said he wasn’t entirely comfortable with because that’s “not really who we are [as a practice].” However, he said they found a solution that appeased them both.

Part of the design solution involved wrapping the building in a thin “saran wrap” where they could slump a geometric shape that improved its structural integrity, so “we could thin the glass and remove any vertical mullions.” The solution was to slump giant Xs in the façade, something, he said, could only be done in Istanbul at this moment, as it would have been cost-prohibitive anywhere else. It was viable there at that time because, in Turkey, there was a huge diaspora of Turkish contractors that had moved into Western Europe, become “wildly, technologically sophisticated,” and then brought that technology back to Turkey. Also, at the time, there was a remarkable craftsmen class in Turkey. Ramus added that they also had very sophisticated equipment to control the cooling and slumping process of the glass. Tying this into the owner’s desire to express the brand, Vakko, the slumped X is representative of a V on top of an upside-down V.

Ramus next described the second project, 2050 M Street in Washington, D.C., with Tishman Speyers, as the intellectual evolution of the first. For this project, like Vakko, they carried over the concept of eliminating vertical mullions. While they could not create the same type of slumped glass as they did in Turkey, he said they could take advantage of new innovations in bending and tempering furnaces, in which a single lite of curved glass could be produced in seconds.

Ramus said when they presented the project in competition, they presented both the design and the procurement strategy. Both were selected. And through that strategy, the firm would create a pre-validated prescriptive design, pre-validating the glass, frame, and the support. Ramus said they separated the glass from the frame and support because for the client to feel comfortable moving forward, they would need to validate the glass optically and also that the price would meet the overall budget.

They next went to five fabricators around the world for samples as well as pricing. Each created prototypes, and, ultimately Northglass in China was selected. Ramus said that initially, the pricing from all five was in the order of 2:1. He  emphasized the importance of taking the procurement and separating the systems out.

When initially presenting the project to Tishman Speyers, Ramus said to them, “if you take the project on, you need to agree now to pre-purchase the glass.” Which they did. The glass was negotiated and pre-purchased, and novated to the successful façade subcontractor (TSI Corporations). Now, Ramus said, they were getting those prices competitively based only on the proprietary details of frame and support, not the glass.

The Zak World of Facades, New York event, concluded yesterday and will next travel to Saudi Arabia in February 2022. Stay tuned to USGNN™ for more from the most recent event.