Posted on November 3, 2021 by Luly Hernandez 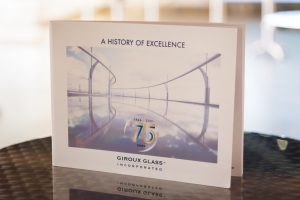 What was once a small business servicing and repairing windows in Los Angeles has grown into a large-scale architectural glass and glazing group working on a slew of projects across the country. And that business just celebrated its 75th anniversary and released a new book, “A History Of Excellence,” available on its website.

Giroux Glass, founded by Louis Giroux in 1946, held its anniversary celebration at SoFi Stadium in Los Angeles, where it provided glazing work that it completed in 2020.

The “team installed the glazing at a number of locations throughout the 70,000-seat stadium, including concession stands, corridors, private suites, ticketing areas and more,” according to a press release.

Throughout its 75-year existence, Giroux Glass faced challenges in the form of damages from protests and outrage, which followed the Rodney King case in 1992, and the Northridge earthquake in January 1994, which damaged buildings across Los Angeles.

“Our team worked tirelessly throughout the entire stretch of Wilshire Boulevard, from downtown to Santa Monica,” according to the company. “Businesses we tended to included the L.A. Times building and the famed Bullocks Wilshire department store, which suffered some of the most extreme damage of the event,” in reference to the uprisings in 1992.

Shortly after projects and repairs were completed, the West Coast suffered from the Northridge earthquake in 1994.

“We got to work, installing curtainwall for a number of damaged properties, including a 4-story office building in the San Fernando Valley, the American Jewish University off of Mulholland Drive (known then as the Brandeis-Bardin Institute), and the California Institute of the Arts in Ventura County.”

Other challenges, in the form of COVID-19, have also plagued the company.

“While the initial adjustment phase was rocky, and many projects were put on pause, cancelled or postponed, business is gradually getting back to where it was pre-pandemic. Despite the year’s many setbacks, our teams managed to secure a consistent number of substantial contracts, hire new team members and meet our financial goals for the 2020 fiscal year,” the book reads.

At the recent anniversary event, the president and CEO, Nataline Lomedico, and chairwoman emeritus, Anne-Merelie Murrell, spoke and expressed optimism for the company’s future. 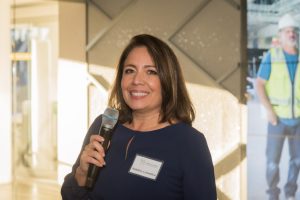 “Our 75 years of success are primarily due to continual adjustments along the way,” said Lomedico.  “Each strategy, initiative, plan, procedure, protocol, accounting report, new software, tool, plan for innovation, client/vendor relationship, and new hire has the potential to foster Giroux’s success and support our sustainability and growth as a company. We must continue to find new ways to keep our finger on the pulse of our business. We must look beyond what we see in industry outlook and economic reports to find what is yet to be seen. Our goal at Giroux is to provide solutions for problems that haven’t yet been identified as problems. We will continue to unite our company-wide resources to establish ourselves as the strongest force in the glazing industry.”

According to the company’s recently released book, Lomedico was instrumental in Giroux’s survival and recovery from the recession.

Throughout the years, Giroux Glass has won several awards, including spots in USGlass’ “Industry’s Top 50 Glaziers,” and accomplished large-scale projects such as the Skywalk at the Grand Canyon, College of Hospitality at the University of Nevada, Las Vegas, and the  Universal Studios Hollywood thrill ride inspired by the movie “Jurassic World.”