On November 11, the anniversary of the armistice that ended World War I in 1918, the glass and glazing industry joins the rest of the country in recognizing those who have served in the armed forces. 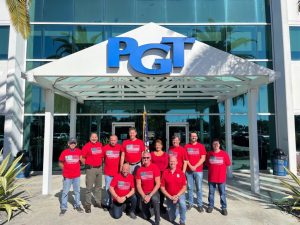 PGT Innovations recently donated $9,580 between two nonprofit organizations, Operation Warrior Resolution and Wounded Warrior Project. Also, earlier this year, the company designed its own branded RED (Remember Everyone Deployed) T-shirt for employees to purchase and wear on Fridays for RED Shirt Friday, a movement to show support for deployed troops.

“A number of our folks are veterans, and we noticed that many of them had started participating in the RED Shirt Friday movement individually by wearing their own red shirts,” says Jeff Jackson, president and CEO.

The company’s RED t-shirts will continue to be available for their team members to purchase throughout the remainder of 2021. The company plans to donate the additional funds raised in early 2022.

“Each year, in honor of Veterans Day, we at Giroux Glass like to pay tribute to the brave men and women of the U.S. armed forces. We are honored to take this opportunity to extend our gratitude to the millions who have served, as well as those who continue to serve our country, including several of our own partners,” reads a press release. “To our soldiers past and present, today and always, we owe you our thanks, our safety, and our freedom. To our Giroux Glass veterans, we are deeply grateful for your service, your sacrifice, and for the commitment you bring to your work every day.”

Veteran employees at Giroux Glass include:

1 Response to The Glass and Glazing Industry Honors Veterans