Blue Hues: Long Beach Glass Conference Takes a Look at One Nearby Project 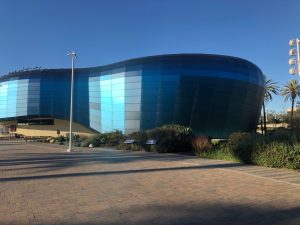 The Glass Conference taking place this week in Long Beach, Calif., included a case study discussion about the blue glass featured in the nearby Aquarium of the Pacific.

Attendees at this year’s National Glass Association’s Glass Conference in Long Beach, Calif., had a serious case of the blues yesterday—blue water, blue skies and the shimmering blue Aquarium of the Pacific. The nearby aquarium hosted last night’s welcome reception, but before attendees could see it firsthand, several members of the glazing construction team provided a case study presentation about their work on the project. In-person panelists included Kirk Johnson with Pulp Studio; Vaughn Schauss with Kuraray; and Trent Zinn with Woodbridge Glass. Charles Alexander, with Walker Glass, was unable to attend but participated via Zoom.

Johnson provided an overview of the project, explaining that Pulp’s previous CEO, Bernard Lax, who passed away suddenly last August, had been very closely involved with the onset of this project. Johnson said there were six or seven different iterations of samples, including multiple variations of the glass.

“There was a lot of time in the development of a building that’s similarly shaped like a whale, that appears to be bent, but has no bent panels,” said Johnson, explaining that it was challenging from the design perspective. He added that his company was involved closely with Woodbridge Glass, as well as Clark Construction, the general contractor. 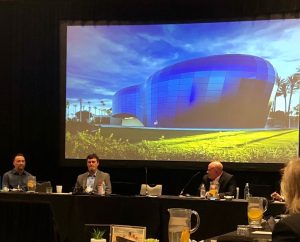 From left to right, Trent Zinn, Woodbridge Glass; Vaughan Schauss, Kuraray; and Kirk Johnson, Pulp Studio participated in a discussion about the Aquarium of the Pacific.

Completed in 2019, the project was designed by San Francisco-based architectural firm EHDD. The blue glass portion of the project is a self-standing rainscreen that incorporates roughly 850 uniquely shaped, triple laminated panels.

Walker Glass provided its Walker Textures Velour acid-etched finish on Starphire Ultra-Clear® glass by Vitro Architectural Glass for the exterior lite. The blue-tinted interior lite features Vitro’s Pacifica coating and the innermost lite includes Pilkington’s Mirrorpane with a black opacifier on the sixth surface. The black coating was important because the inside of that area is a theatre, so no light could be allowed to come in.

The interlayer was also an important part of the glass make-up. According to Schauss, the interlayer helped provide depth, variability and luminosity. All of the panels are the exact same make-up, however, they all look different depending on the direction of the sun.

Schauss added that all of the glass has exposed edges and is minimally supported. Plus, since it’s blue, thermal properties were also a consideration. Zinn said they had an engineering group perform thermal glass calculations to address how the glass would perform in the heat.

Speaking of the installation process, Zinn said planning was critical. The project was built from a BIM model—a model so robust that … “everything was drawn right from the model,” he said. Zinn said they also worked closely with design firm Sentech, which built the model. Sentech provided façade engineering and material supply, including its VetraFin-S Series.

In addition to the case study, yesterday also included reports and updates from the Tempering, Mirror and Decorative Committees of the Fabricating Division. The groups are continuing to work on new documents, manuals and presentations. In the Tempering Committee, the group continued a discussion on the potential concerns surrounding post-tempering fabrication, such as edge grinding. Industry consultant Bill Lingnell provided a discussion via Zoom about testing various types of monolithic and laminated glass to determine numbers and data to support this concern and will be providing a proposal to the group.

The Glass Conference continues this week through Wednesday. Stay tuned to USGNN™ for more news and reports.