Fire, Safety and Energy: A Look at the Latest Code Updates 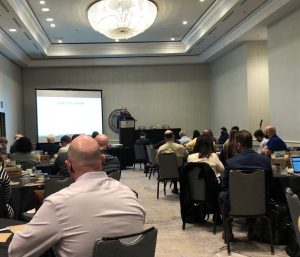 Ever-changing codes mean there is a lot of information for the glass and glazing industry to follow to ensure the right products are used in the right applications. To help keep the industry aware, consultants Thom Zaremba, Nick Resetar and Tom Culp provided code updates during this week’s National Glass Association Glass Conference in Long Beach, Calif. The three provided a detailed look at some of the changes and developments within three specific areas.

Zaremba began with a fire, structural and safety update, including a look at one code that may have been new for some attendees—the International Wildland-Urban Interface Code (IWUIC), which is a supplement to the International Building Code. The code is intended for areas designated as “wildland-urban interface zones.” The IWUIC regulates two areas of special concern for the glass industry: exterior walls, which can be either opaque or glass; and exterior glazing used in doors and windows.

Zaremba explained that if glass is used in exterior walls, it must be fire-rated. Likewise, all exterior glazing within windows, window walls and glazed doors, windows within glazed doors and skylights must be tempered or have a fire protection rating of no less than 20 minutes. This is because in the event of wildfires, winds can blow hot embers and sparks and if struck by these embers, annealed glass can crack.

Resetar, also a consultant, provided an update on what’s in store with the model building codes. One of the proposals coming up that concerns safety glazing is IBC 2406.1. This relates to multi-pane assemblies coming into the U.S. where the outer lite is marked as safety glass, but the interior lites are annealed. The proposal will require all panes/lites of glass in these assemblies to be safety glazing.

Energy codes consultant Tom Culp next gave an update on the 2024 International Energy Conservation Code. He said the organization has changed from a traditional code hearing process to a consensus hearing process. He said while this does allow for a lot more technical discussion, “the downside is it does take a lot more time.”

Looking at possible code changes, Culp said the group is “tackling tough items first.” These include matters such as thermal bridging and air leakage. Electrification will be a big topic later on. This includes renewable energy, EV charging and energy storage. In addition, options for Net Zero building are also being addressed.

According to Culp, there are 255 commercial proposals and 184 on the residential side within the IECC.

On the commercial side, eight proposals are specific to the envelope and three concern spandrel. On the residential side, five proposals have fenestration-specific criteria.

Culp also talked about a spandrel research program. Organized by the Charles Pankow Foundation, the purpose is to look into a research program to improve the characterization and modeling of spandrel. The reason for the research is that spandrel is not well addressed in energy codes and thermal modeling is inconsistent. The efforts are led by several engineering firms, with the Department of Energy providing help from groups such as LBNL.

As far as ASHRAE 901.1, Culp said there are no fenestration changes in 2022. However, that code is looking at thermal bridging and air leakage in the opaque wall area. In addition, a new onsite renewable energy requirement will be included.

In ASHRAE 189.1, also the 2024 International Green Construction Code, material transparency is becoming increasingly important. Concepts debated include increasing the number of Environmental Products Declarations (EPD) required on a project; having EPDs cover a minimum percentage of the total cost of materials on a project; requiring manufacturer-specific EPDs rather than industry-wide; and requiring improved material attributes and not just the EPD. According to Culp, this could require a certain number of products to have lower EPD attributes than either a previous version of the same product or 125% of the industry average for the product.

Culp also talked about an organization called the Partnership for Advanced Window Solutions (PAWS), which is a public/private initiative between government, labs, manufacturers and others to increase demand for high-performance windows in new and existing buildings. Initially residential, the group is now focused on commercial as well.